Team Sharkbait, one of this year’s senior design groups, is working on a hybrid air-water vehicle that, if successful, will revolutionize the world of aviation. 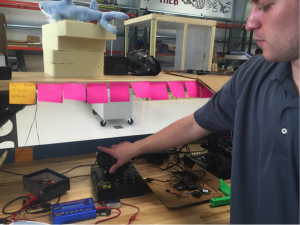 The purpose of this project is to design a plane that can fly, land on the water’s surface, submerge and act as a submarine, and then resurface and take off again into flight.

“It’s not something that’s ever been done before, at least not the way we’re doing it,” said team member Jake Watson, an aerospace student.

The idea first came to life over a late-night brainstorm session when three engineering students started talking about what they wanted to do for senior design. As the idea snowballed, Morgan Steinert, project manager, soon had a full team of students pitching their idea to their junior design class.

“The requirements for flying and diving are at exactly opposite corners of the picture,” said Markus Wilde, the aerospace professor overseeing the project. “If we can get it going, especially with a student team, that would be very impressive for Florida Tech.”

Team Sharkbait has spent the past year researching and designing their project. This semester, it is finally time to turn their sketches into a working prototype.

The concept of a hybrid air-water vehicle was tried two years ago by another senior design team. Their design failed. Prominent innovative organizations such as the Naval Research Laboratory, Northrop Grumman, Boeing and other technical universities have been working on projects with similar concepts as well.

Rutgers University has successfully tested an air-water quadcopter, and Boeing has designed a plane that can shed its wings and tail to become a submarine. Watson and Boeing’s design is different from theirs, as Bowing’s is “one-time use only” deal. Steinert said that their design is more functional, reusable and will be faster and easier to manipulate than others being tested. 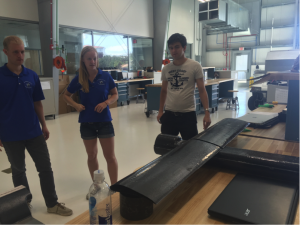 “The fact that we have the opportunity to do this as college students and we were given the resources to be able to build something like this, you cant really ask for much more,” Watson said.

Steven Gilbert, a Florida Tech student, said it would be huge for technology if Team Sharkbait is successful, not just for FIT, but for the world.

“Now you’ve created a different means of transportation and security,” Gilbert said. “To be able to control the water and the air, simultaneously if you had to, is pretty cool.”

Despite the hype, Team Sharkbait’s story is not yet one of success. They are currently in the building phase, 3D printing parts and forming carbon-fiber shells. The team has a long way to go before they can say that their idea has worked.

“We’ve had to come up with creative solutions and make compromises between what suits a submarine and what suits a plane,” Watson said. “That’s been challenging, but I think we’ve been successful making the proper compromises.”

The following month will be crunch time as the team puts an exponential amount of hours into the project leading up to testing deadlines at the end of March.

Smiling, Watson said that his team is working hard to stay on schedule, but if it comes to the point of late nights, they’re ready for it. Once Team Sharkbait surmounts the challenge of building a viable prototype, they must overcome the hurdle of testing their design. In an effort to be as successful as possible in their mission, the team is seeking FIT approval to test their design in the Florida Keys.

“Stability wise for our vehicle we really need the calm water to be able to take off and clear water helps with being able to see it underwater,” Steinert said. “We also designed it for salt water so, we can’t go to a lake or inlet to test it.”

At this stage in the game, Steinert said how she simply happy with how close her team has become, especially since they spend so much time together.