The immune system is a multi-faceted network of cells, tissues and organs that serves as the body’s defense against infectious organisms. It is also a point of interest for Kenia Pedrosa Nunes, a vascular biologist in Florida Tech’s Department of Biomedical and Chemical Engineering and Sciences, as she seeks new approaches to combat two widespread chronic diseases, high blood pressure, also known as hypertension, and diabetes. 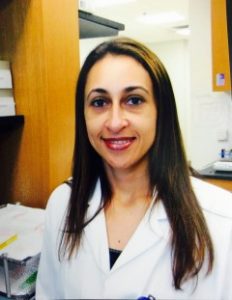 Any potential breakthroughs in combating these two diseases would represent major news for millions of people. About 1 of 3 U.S. adults—or about 75 million people—have high blood pressure, and more than 100 million U.S. adults are now living with diabetes or prediabetes, according to the federal Centers for Disease Control and Prevention.

There are two levels of the immune system: the first for more minor ailments such as the common cold and the second for chronic diseases such as hypertension and diabetes. One of the effects of chronic disease is damage to our veins, but surprisingly, first-level immune system receptors have been found in this vascular damage. That is unusual because common colds and other first-level conditions don’t usually lead to vascular damage.

But for Nunes, those receptors present an opportunity. She is researching an approach that involves blocking receptors in the primary level of the immune system, which she believes may be able to curtain those chronic diseases.

Her work in this area is important as hypertension can have adverse effects on our arteries.

“When we discuss vessels, sometimes we think veins, but arteries are more important,” Nunes said. “The arteries are the ones where if they get blocked, we have a stroke, heart attack, erectile dysfunction or renal failure.”

Nunes is testing her strategy by targeting the receptors in the arteries of mice with hypertension and diabetes. In her tests, every time the receptor was blocked, the subject’s vasculature improved. While the results have been positive, more research is to be conducted to determine if the treatment is a viable option. Blocking the receptors could leave a person’s defenses down during a cold.

“It’s an immune system. Every time I block it, I need to be aware,” Nunes said. “Everyone is trying to block the immune system without compromising it, and that’s a challenge.”

The first line of immune system defense was not thought to play a role in the body’s battle against chronic diseases, but research of over the last decade has discovered immune system receptors in the first level are in fact modulating the diseases. This is a challenge for Nunes, as she is researching where they are exactly in the arteries, why they are there and their role in battling chronic disease.

Nunes was inspired to get involved in the fight against hypertension and diabetes through her work with spider venom and erectile dysfunction (ED). Nunes has two patents for the pharmaceutical composition of this arachnid toxin, which has been shown to improve ED in rats. In order to study ED and the venom’s effects, she needed subjects that had hypertension or diabetes, as erectile dysfunction can accompany those with the diseases. While studying the vasculature of the animals, Nunes analyzed ways she could curtail the ailments, possibly minimizing ED, as well.

While Nunes doesn’t see these treatments as an absolute elimination of the diseases, she does see this as a possible way for people battling hypertension or diabetes to extend their lives for several more years.

“I think we are on the way to blocking receptors, we just need to dig more into the literature and experiments and understand the role of these receptors,” Nunes said. “I think if we understand better we can have a therapeutic approach to manage vascular damage in the disease.”