For many chemotherapy patients, the almost inevitable hair loss it causes can be very emotional and traumatic — enter cryotherapy.

According to the Mayo Clinic, men and women report hair loss as one of the side effects they fear most after being diagnosed with cancer. It all happens pretty quickly into the treatment, usually within two to four weeks, so it can be a dramatic change for many, including friends and family.

Thankfully, there are a few prevention methods currently being tested that have shown promise, including scalp hypothermia also called cryotherapy. Cryotherapy works to restrict the blood flow to hair follicles, decreasing the opportunity for chemotherapy to attack those cells and help keep the hair follicle intact.

Many of the more affordable cryotherapy methods use dry ice applied to the scalp with a hair cap to slow the blood flow to the scalp, but a group of biomedical and mechanical engineering students are creating a new method, known as “Coldylocks.” The Coldylocks team includes Florida Tech students Kimberly Juriga, Adam Gabriel and Star Seliquini.

“Right now, patients are have dry ice applied to their hair follicles, which is solid and hard to spread out over the scalp,” Juriga said. “The temperature also can’t be altered, so areas of the scalp can end up with patchy hair loss.”

The team’s solution is the pairing of a neoprene cap that has a saline solution integrated throughout the cap that covers all the hair follicles at once. This cap is then connected to a vapor compression refrigerant system that keeps the saline at a constant temperature, which can also be adjusted as needed.

“It’s basically a jump from a Nokia phone to iPhone,” Gabriel said. 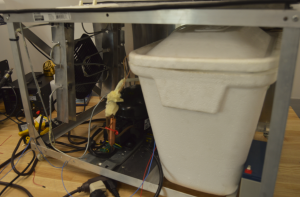 Other systems commonly found in hospitals tether the patient to the machine during the entire chemotherapy treatment, making bathroom breaks nearly impossible.

The Coldylocks system is designed to be portable. Once unplugged, the battery backup is activated so the patient can have an opportunity to move around.

“Once we have proof of theory, we expect the entire system to cost under $500,” Juriga said. “So it will be affordable for personal use.”