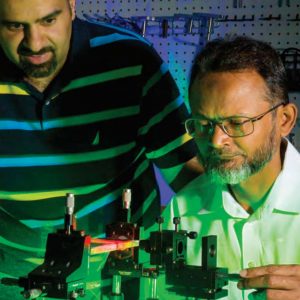 Syed Murshid Works to Help the World Improve its Connectivity

If you have siblings or roommates, you probably know the telltale signs of reaching the bandwidth limits on your Internet connection: online gaming lags, streaming video won’t load, frustration rises.

Total Internet traffic is increasingly globally, so slowdowns like this are afflicting apartments, houses and offices from Melbourne, Fla., to Mumbai to Milan. In fact, if traffic continues to increase at the pace it is rising now, we can expect to see a 10,000-fold increase in data traffic in the next 20 years, according to Syed Murshid, a professor in the Department of Electrical and Computer Engineering at Florida Tech.

But Murshid isn’t just monitoring that growth. He and his team of graduate students are responding to it with research and products that could drastically reduce, or even eliminate, these irritating slowdowns.

Because even with the fastest mode of data transfer available – fiber optics – the current infrastructure cannot support this kind of data increase. As the technology develops and demand rises, many buildings, including critical centers such as the Pentagon, are simply laying higher-speed fibers down because the cost of tearing into walls to remove the old ones is just too much.

This is a wasteful process that leaves a large amount of installed fibers unused. So Murshid and his team developed something called Spatial Domain Multiplexing that would allow these older fibers, as well as the new ones, to continue to be utilized as the demand for high-speed internet increases.

Spatial Domain Multiplexing, or SDM, is a method within fiber-optics that allows many channels of light to go through a fiber and, in the part of the process that earned Murshid and his team a U.S. patent, be separated at the end. The channels are separated in a way that allows the capacity of current optical fibers to be multiplied.

The multiplexer device connects to the start and end of fibers and allows data to pass through in a series of concentric circles, rather than just one stream of data at a time, increasing the data rate by five times what unmodified fibers can do.

“As this technology continues to mature, we expect to see many benefits, such as improved signal strength, increased capacity and heightened digital capabilities in the business world,” Murshid said.

As if that wasn’t enough of a discovery, Murshid also proved the existence of something called orbital angular momentum in fiber optics. By sending some data streams in a clockwise motion and others in a counterclockwise motion, he has been able to show that these two sets of data can exist in the same circle at the same time, which further doubles the amount of data that can be transmitted.

All told, Murshid’s invention, when implemented, could initially speed up existing internet by tenfold, and even more in the future, meaning your next movie night and your roommate’s gaming marathon could peacefully coexist.