It’s a test of engineering spirit and a showcase of ability to not only make seaworthy what seemingly shouldn’t stay above water but also to design a vessel that can defeat others in a race for the national championship.

The Florida Tech Student Chapter of the American Society of Civil Engineers will host the 32nd annual National Concrete Canoe Competition from Thursday through Saturday this week. This is the second time Florida Tech has hosted, though the first since 1999. Twenty-four teams will compete, and along with the race, the three-day event features academic presentations, final project judging, a sustainability competition and more. 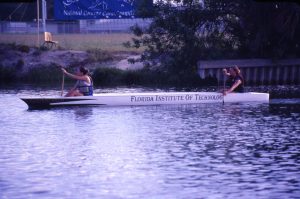 While Florida Tech is not competing this year, the university has enjoyed success, reaching the national competition seven times from 1997 to 2011. The team finished in the top three in 2017 and 2018 under team lead Quinn Duffy, a recent graduate now serving as Florida Tech Facilities Operations Project Manager. As this year’s conference coordinator, Duffy hopes the competition will give Florida Tech students insight into what is needed to be successful for next season, while providing exposure to his cherished alma mater.

“I basically bleed crimson,” Duffy said of one of Florida Tech’s colors. “I work here now, I just graduated from here, I love the school, it became a second home and another family for me –  so getting any exposure for the university on the national level in the media, in the circles of our profession, any way I can to make sure that, as our president, Dwayne McCay, says, we stand out for how good we are.”

Florida Tech’s past success in the concrete canoe competition can be attributed to the ingenuity of Duffy and his team, and to the many students who proceeded them. In addition to building a canoe with steel mesh reinforcement and carbon fiber, Florida Tech uses a spacer between the steel and carbon fiber called Nomex, a Kevlar-blend, honeycomb-shaped material. According to Duffy, the canoe is two to three times stronger than other vessels in the country, allowing for added durability.

“We can stand in the middle of it, it’s not delicate,” he said. “Some teams carry them with ten or twenty people, making sure it doesn’t break because it’s so delicate. We have dropped ours on the ground from shoulder height and it didn’t even crack.”

The team has examined and improved key design elements over the years. Because the concrete that is applied needs to stretch more than the mixture that is commonly used, Florida Tech has developed mixes that are more versatile. Students have also focused on using sustainable materials, as well as avoiding potentially harmful chemicals wherever possible.

Another element in Florida Tech’s design is the way the teams race. According to Duffy, Florida Tech is the only school in the country that uses foot braces, which allow for the stabilized racers to get a powerful, consistent stroke and propel the canoe more smoothly in the water. 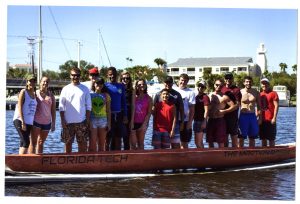 Over the years, working on the canoe has provided students with real-world challenges. The team has built the canoe in different places on campus, such as the Frueauff Energy Research Building and the Applied Research Lab. While the team is moving to the old wave tank building, the ability to be flexible and reach project deadlines is a preview the duties required in civil engineering.

“The job I’m doing for the university now is project management, and it’s construction projects and renovation, and I don’t think I would be as well prepared for coming right out of school and jumping into that job if I didn’t do the concrete canoe,” Duffy said.