As we enter 2022, here are some university research highlights from 2021.

One of the current projects is a parabolic flight experiment funded by NASA, called the “Autonomous Multi-Cycle Farming System”. The team, consisting of Wilde, mechanical and civil engineering assistant professor Hamidreza Najafi, and aerospace, mechanical engineering and computer science student researchers, took a 2020 Senior Design project, a modified 3D printer to implant and nurture plant seeds into water-filled feed trays in space, and are turning it into an experiment for a parabolic flight. Brian Kish, aerospace, physics and space sciences associate professor is supporting the project with flight testing. According to Wilde, the feed trays have been successful in growing plants and the team plans to fly in late November or early December this year.

“What we are going to show with that parabolic flight is that the planting mechanism works fine in microgravity, and that the system is able to function through changes from zero gravity to 2Gs,” Wilde said. “The cool thing is that these parabolic flights also provide Martian gravity and moon gravity, so we’re going to be able to show the system works on orbit, on the moon and on Mars.” For more, click here.

As the focus on climate change and electric transportation increases, a first-in-the-nation acquisition for Florida Tech will allow for hands-on learning and important research on a new and timely aspect of aviation.

In August, the school became the only American university to own and fly an electric plane. The Velis Electro, a light aircraft from the Slovenian company Pipistrel, was introduced last year. The first electric-powered airplane certified in Europe, it has a maximum speed of 181 km/h (113 mph, 98 knots), zero emissions, an engine with a noise level of 60 decibels (quieter than the single-engine Cessna 172 which is 85 decibels) and a body made of composite materials. The plane costs $190,000.

The two-seater has not been flown in the United States until now. It is awaiting U.S. certification, so Florida Tech is flying it under the “experimental” category. Florida Tech alumnus and former associate dean Isaac Silver was the pilot for the inaugural flight. He flew for 22 minutes, using about a third of the aircraft’s battery capacity and creating an operating cost of only $1.03.

The plane will give students the opportunity for experiential research with cutting edge technology, providing a research value added to their educational experience.

Ocean engineering and marine sciences professor Stephen Wood and research students John Carroll, Sydney Goodman, Gabija Karosas, Alexa Langley, August Neier and Katherine Tyson are proposing to use a 3D printer to make coral structures that would then be placed upon large mounds of concrete in the ocean. The goal is to design a production method in which creating artificial coral reefs is accessible and affordable, and using 3D printing would decrease the time to produce artificial corals. The team is working to build a printer that is much larger than common printers on the market, which will allow them to print life-size corals.

To reach their goals, the team assembled a smaller 3D printer to familiarize themselves with the mechanisms and construction of 3D printing. They then designed a full-scale 3D printer to print in ceramic, though there is a future option to print in concrete. Mixing engineering and coral biology, the researchers looked at different 3D-printer parts and filament materials as they would relate to various corals and designs, and they also considered how the printed products would react in the ocean environment. The team also used a sample printer to print small models of corals, which represent the final print concept.

While the printed corals may not look identical to the real thing, they will be designed with an important goal in mind: facilitate coral growth.

“We may print out the base structure of the coral, like an Elkhorn coral, we could print a good majority of that, so when the little polyps adhere, they could grow off of that,” Wood said. For more, click here.

Facial recognition and analysis, and the machine learning techniques behind them, have many applications, from affirming identity documents to unlocking mobile phones. Now this technology may have the power to help doctors better understand and diagnose neurodegenerative diseases.

Diego Guarín, assistant professor in the biomedical engineering program, has been working on using facial recognition and analysis and machine learning algorithms to evaluate the effects of different neurodegenerative and motor disorders in speech production and facial movements.

The overall goal of Guarín’s research is to use facial recognition techniques to analyze if patients have neurodegenerative or motor disorders, such as Bell’s palsy, Parkinson’s disease and ALS. Using this new technology would allow doctors to provide more effective care to individuals who are developing these diseases, as well as to track disease progression and provide a baseline to see if those with the disease are improving with treatment.

Using an artificial neural network to find a specific location on the face, Guarín then uses the recognition technology to track how the person moves their face. His experiments are currently performed in well-controlled environments, such as a room with a good camera, low noise, and proper illumination. Guarín’s next work will involve testing these approaches to detect neurodegenerative diseases in home environments during a video call.

“The patients are going to perform certain exercises in front of the camera, such as opening their mouth and saying some sentences,” he said. “The computer is going to track how the patient moves their mouth and face, and then we’re going to have an idea of if that movement belongs to a healthy individual in their age group or if that movement belongs to a person with a specific disease.” For more, click here.

There is an urgent need to develop sustainable agricultural practices and ensure food security at a much higher level than has ever been attempted – or required. According to a study conducted by Bisk College of Business assistant professor Darrell Burrell and others, this leap might only be possible with the rapid development and application of cutting-edge technologies, including artificial intelligence (AI).

Burrell, along with colleagues from Grand Canyon University, Temple University and Illinois Institute of Technology, published “Exploring technological management innovations that include artificial intelligence and other innovations in global food production,” in the International Journal of Society Systems Science last year. The research offered new data on technological innovations that may help overcome agricultural concerns for meeting a process improvement initiative.

The study analyzed technologies being used to increase food production, as included insights from those in the industry. The research found there were several AI-related systems that are used in farming, ranging from drones surveying the crops to solar panels and sunset-triggered irrigation to motion sensor technology that serves as a digital scarecrow by scaring birds away from crops with a simulated human yell. The paper even looked at robots picking crops.

“The things that I’ve seen in my research are the ability to capitalize on technologies that were maybe intended for one purpose but are now being used for another,” Burrell said. “The ability to use drones to survey your farm actually makes things more efficient. Instead of me having maybe five people inspecting my farm, I could sit in my farmhouse and use this drone to inspect and review what is going on.” For more, click here.

Our brain is made of millions of cells called neurons. Neurons send electrical messages to talk to each other in patterns of vertical electric activity called oscillations. By inducing them first, then finding the amplitude of the specific brain waves improved during memory, ultimately memory performance itself is boosted. Once introduced, what if a person can boost the speed of these oscillations to improve memory? A university study in a journal for adolescents may show we can do just that.

Psychology assistant professor Rick Addante and clinical psychology doctoral student Mairy Yousif, along with researchers from California State University, San Bernardino, looked at the brain-boosting potential in the research paper, “Boosting Brain Waves Improves Memory.” The paper was published in the November 2021 edition of Frontiers for Young Minds, an open-access scientific journal written by scientists and reviewed by a board of kids, teens and expert scientists. As the largest impact journal in the entire Frontiers system, this allows for more (and younger) eyes to look at new scientific research that is not often seen by the masses.

The original empirical discovery was published as a technical report, but this version was specially developed and written for accessibility to public STEM audiences. “[Cognitive neuroscience is] a pretty niche field and we don’t get a lot of exposure and readership on what the discoveries are, but through this journal that they’ve developed, they can get millions of downloads per month of individual articles because it’s free, it’s open access to kids all around the world,” Addante said.

The team analyzed if memory could improve by stimulating the brain using flashes of lights and sounds that caused the brainwaves to be in sync. People received rhythmic brain stimulation in special goggles and heard auditory beeps in headphones. This process, known as entrainment, trains the brain to be in sync at a specific wave pattern called theta. People whose brains were trained to be in theta showed improved memory compared to people receiving random stimulation. The team found that entrainment can safely manipulate brain waves to improve people’s memory, which opens the possibility of using devices like the ones researched for helping people who suffer from memory disorders. For more, click here. 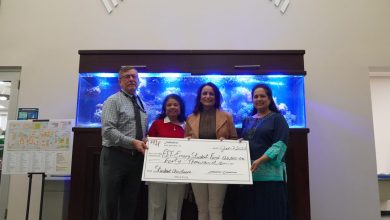