It was a deep and unwavering love for rockets and the prospect of designing systems completely from scratch that inspired aerospace engineering students, Kyle Levin, Gabrielle Leesman, Kristen Erickson and the rest of their team to build and fly high power projectiles with a hybrid rocket engine.

They dubbed their mission “Project Vulcan” and began planning an endeavor that would essentially be the culmination of everything they had learned in their four years at Florida Tech.

Vulcan was designed to be a multi-step project that would provide launch capability to an altitude of 10,000ft. for the university, using an in-house airframe and hybrid rocket motor system.

“Being able to give the school a system that can be expanded in the future to fly payloads to higher altitudes with in-house parts was a great opportunity,” said Kyle Levin, group lead.

One of the largest challenges the team had was systems engineering. “Each sub-system for this project depended very highly on the other,” Kyle said. “A change in our airframe’s mass caused changes in both our recovery system calculations and our engine design.”

Such situations inevitably pushed the timeline of the project back and caused bottlenecks at different points during the process, especially with ordering and receiving parts necessary for construction.

“Another challenge we encountered was learning to work on a budget,” Kyle said. “Obviously you set a budget and ask for money but you can’t always get the massive budget that you originally wanted. This requires working to ensure that you are optimizing funds and redesigning to ensure that the project fits into the new budget.” 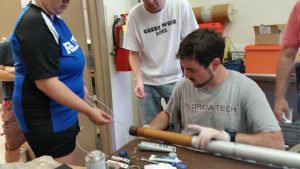 The team learned a lot more about hybrid rocket engines. Since they are a relatively new motor technology, the team had to learn about both traditional liquid motor functionality as well as about solid motor designs, like the ones on the Space Shuttle’s side boosters.

“I think it was also interesting to discover a different team dynamic than you usually see in projects,” Kyle pointed out. “Unlike a class project or group assignment, Senior Design requires significant amount of team chemistry beyond the usual need for communication and teamwork.”

“Working with each other on a daily basis for a year and a half to create a final product from the ground up requires patience, understanding and camaraderie to succeed as well as the ability to keep everyone moving forward at all times,” Kyle said.

The team admits that of all the things they would approach differently with the project if given the chance, the foremost would be ensuring the existence of a solid line of communication between them and their customer.

“There were a few miscommunications during the project that lead to some difficult design changes and misunderstandings at times,” Kyle said. “Another thing I would change is the deadlines that we originally set. At the tail end of the project it is obvious that some were set too early and some were needed to be earlier than they had been set.

Equipped for the Future

Kyle cites a great deal of the work that went into creating the hybrid rocket engine has prepared him for life in the real world. “One of the biggest pieces of real-world experience that I got from this project is working on a design team that began with pieces of paper and ended with a product,” he said.

“Vulcan was a chance to set a goal and figure out how to get there on our own, choosing our own methods, designs, customers and advisors to assist us in the process,” Kyle explained.

The team unanimously confirms that the lessons learned in leadership over the course of the project gave them a taste of what it is like to work in the real world. This was especially true for Kyle as the team lead, keeping everyone on task, meeting deadlines and making sure the customer was satisfied.

To Infinity and Beyond

As far as advice goes, Kyle’s words to future senior design presenters are that they make sure they appropriately scope their projects and not overload their timeline and know the limits and growth capacity of their resources.

“Another piece of advice I would give is to ensure that the communication among your team is impeccable,” he added. “Communication is huge – if someone is struggling or getting behind, they need to speak up so that the entire team isn’t put behind by someone that is struggling but not saying that they have an issue.”

Kyle also advised maintaining communication with the customers and the advisors for the project, as well as padding the timeline so as to be prepared for any sudden changes.

For Kyle, the biggest takeaway from the project was the ability to see the bigger picture as opposed to just the small system or problem that lies in the immediate foreground.