King crabs have not been found in the shallow waters around Antarctica for millions of years because sea temperatures have been too low for them to survive. However, rising temperatures and the impact of global warming are now allowing king crabs to colonize in Antarctica’s shallow waters. An invasion of king crabs could potentially cause problems in the Antarctic water because its communities are mainly made up of slow-moving invertebrates. These invertebrates have little defense against the shell-crushing forces of the crabs.

Marine biology undergraduate student Brittan Steffel researched the ecological impacts king crabs might have if they moved into shallower waters. By analyzing the gut contents of the crabs, she found they are eating almost every type of invertebrate found on the Antarctic sea floor, which means they could have a large impact on the unique Antarctic communities.

Her project is an example of what the impact of global warming is having on marine fauna. The effects of climate change are observed sooner at the poles than in other areas of the world. The results of her study will help scientists to project effects that may soon be seen at lower latitudes.

Steffel found it interesting to see king crabs have such a varied diet. Because they have no predators in Antarctic waters, it is likely the crabs will impact the unique communities of invertebrates living there.

Steffel was drawn to this project because of its exploratory nature and the possible implications her findings. 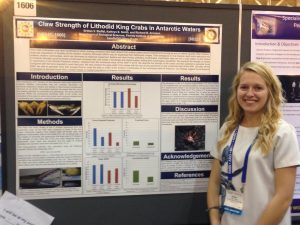 “The deep sea surrounding Antarctica is not well studied, and this is the first time gut contents from Antarctic king crabs have been analyzed,” Steffel said. “My project will help us to understand the future of the Antarctic sea floor and will shed light on the effects climate change is having on polar regions.”

Besides learning how to design and carry out scientific studies, Steffel has gained experience in writing for scientific journals. Steffel advises future students to practice their writing and presentation skills, as well as be enthusiastic about their project.

“It provides training for real-world experience that you don’t get in the classroom,” Steffel said. “Designing an experiment, writing about it and presenting it are skills that you only improve through ‘on-the-job training’ and a lot of practice.”

Marco Carvalho Elected Fellow of the National Academy of Inventors