In space, astronauts experience an increased risk of dehydration due to the microgravity environment causing a shift in fluids and the limited water supply available in their spacesuits during extravehicular operations.

If an astronaut were to become dehydrated, they could experience dizziness, confusion, and loss of consciousness. 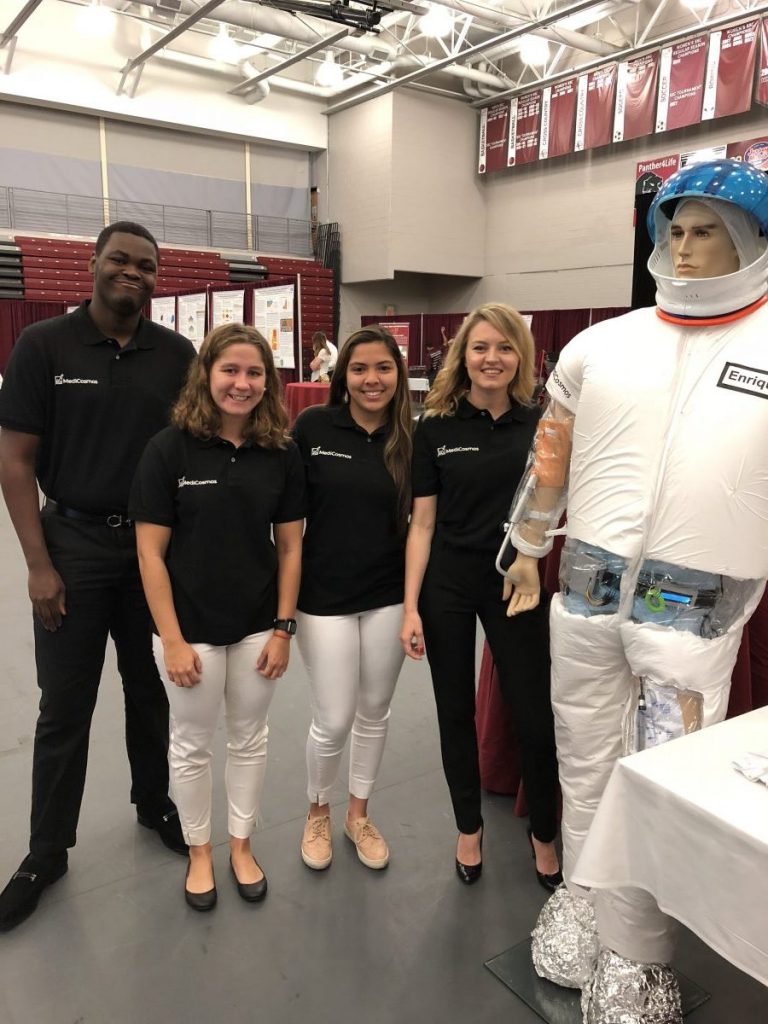 MediCosmos includes three main components: a hydration sensor, an IV fluid pump, and an IV delivery system. The hydration sensor is a conductivity sensor which fits into the astronaut’s diaper and alerts the astronaut of his hydration levels with an LCD display. The IV pump is a pressure infuser that is attached to the spacesuit arm and infuses the IV solution into the delivery device. The IV delivery device is a 3D printed IV delivery system which can insert a needle and catheter into the skin to allow the fluid being pumped by the IV pump to enter and travel through the vein.

As we continue to start preparing for future colonies on Mars, enhancing astronaut safety and health is top of mind for continued space exploration.

“Many of the health risks associated with a three-year mission to Mars are still unknown, but we know that one of them will definitely be dehydration due to the exposure to microgravity environment and the dry air environment,” said Maria Sagastume, biomedical engineering and STEM education ’18.

One of the unique opportunities the students had while designing their project was a one-on-one sit-down with one of Florida Tech’s resident former-astronaut, Captain Winston Scott.

“We learned a lot from our interview with Captain Winston Scott. It was such a great experience to get to meet a former astronaut and learn from his expertise in space flight, knowledge on the EVA suits and gain a better insight on the current treatment for dehydration,” said Sagastume.

While the original system was designed for space exploration, the device has applications right here on Earth.

Anyone who has the potential to suffer from extreme heat, radiation or is unwell could benefit from the MediCosmos system.

The IV delivery system can be used by firefighters, construction workers, the elderly and even cancer patients treated by radiation.

“Additionally, the IV bag can be replaced with any other solution or drug, not just the solution to treat dehydration. This function, enhances the potential of use of the innovative biomedical device for applications on Earth,” said Sagastume.

The team showcased their device during the 2018 Northrop Grumman Engineering and Science Student Design Showcase which was a culmination of their years of coursework and a year of hands-on work.

Here’s what the team had to say about their student design experience.

“Through our project we learned a lot of practical skills that we wouldn’t have learned in the classroom. For example, Chris and I became experts in soldering, coding with Arduinos and designing circuits. Vera and Trista learned to make 3D models and to use a 3D printer.”

“Being able to work with an international group of people providing different ideas and approaches, that finally led to a great outcome, has been the main takeaway from the senior design project,” said Vera Seljanina, biomedical engineering ’18

“Moreover, by creating an innovative biomedical device from scratch, we have acquired skills that we were not managing before the project and which would be useful in the future. It has been a bumpy ride, however it led to fantastic results,” said Vera Seljanina, biomedical engineering ’18.

“My main takeaway from my senior design project was that every idea is not always going to work like you think it will, but it is necessary to keep making adjustments and trying new ideas because seeing your design finally come to reality and work is an incredible feeling,” said Trista Phelps, biomedical engineering ’18.

“Being part of a diverse passionate team as well as bringing to life an idea(s) through the implementation of classroom knowledge were my main takeaways. We experienced problems but we overcame them. Because of the relationship we had developed with each other, communication was very easy,” said Chris Epega, biomedical engineering ’18

“It allows students to get out of their comfort zones, learn new skills, imagine, design, and innovate. It really opens your mind to new ideas and makes you do things you never thought you would do,” said Sagastume.