Florida Tech Professor Invited to Lecture Around the Globe on Brain, Vision and Sustainable Chemistry

When the research is compelling, the world takes notice. Invited to give 10 lectures across multiple continents and 15 time zones this summer, Chemistry Professor Nasri Nesnas dodged two hurricanes, political tension, and jet lag to share his intriguing work on topics such as how molecules can help explain the way humans think and see, and the ability of light to control brain function.  His research on developing light responsive molecules for brain studies is funded by the National Institutes of Health (NIH).

Below, Dr. Nesnas shared his itinerary and highlights from his recent travels as he represented Florida Institute of Technology research at prestigious institutions and conferences throughout the world.

“I started my world tour the day following the Spring 2017 commencement at Florida Institute of Technology when I travelled to the City University of New York (CUNY), John Jay College of Criminal Justice. There, I discussed how Direct Analysis in Real Time (DART) Mass Spectrometry could be used to help provide additional evidence in rape crimes through trace analysis even up to 8 hours post-violation. The lecture represented a multi-year collaboration with Professor Gloria Proni at John Jay College, which culminated in a recently published article in Forensic Science International (full paper here).

While in New York, I visited my former postdoctoral mentor: Centennial Professor Koji Nakanishi of Columbia University, for his 92nd birthday celebration. I also visited Dr. Hui Xie, my first graduate student alumni, who is currently venturing into intellectual property law as a registered patent agent and starting a company to develop novel biomaterials. In addition, I also met one of my key collaborators, a neuroscientist at Columbia University.

I then travelled to the University of Arizona in Tucson to give a lecture on the chemistry of vision, hosted by Professor Michael F. Brown, whom I am currently collaborating with to understand the details of the vision process in the retina of the eye.

Next, I embarked on the international part of my tour with the 18th Tetrahedron Symposium in Budapest, Hungary. In an auditorium of nearly 400 attendees, I opened the afternoon session with a lecture on how light can be used to control brain function. I am, indeed, grateful to the NIH for supporting my research activity in this field. The session was concluded with the 2016 chemistry Nobel Laureate and Tetrahedron Prize winner, Professor Ben L. Feringa of the University of Groningen in the Netherlands, who, to my great honor, referred to my talk in his lecture. 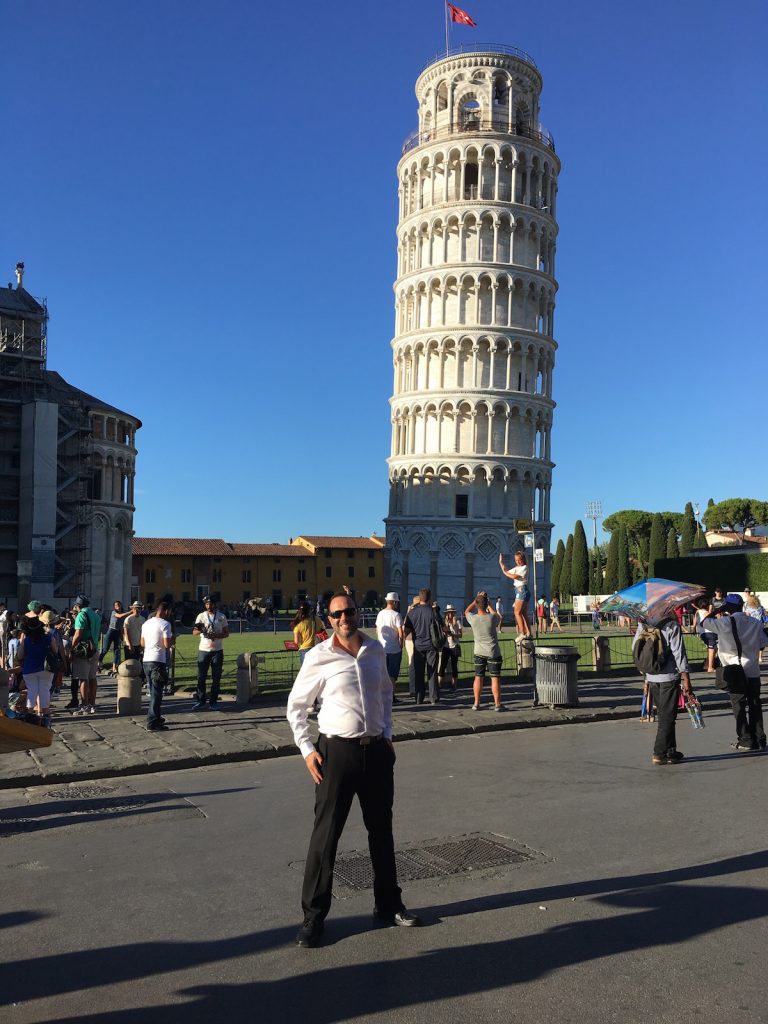 I also traveled to Pisa, Italy to present a plenary lecture at the “Chemistry for the Future” conference at the University of Pisa, on how molecules can help explain the way we see and think.

I then traveled to my birthplace, Jerusalem, a city beset by long-time conflict across continually emerging barriers and separation walls, to lecture at the prestigious Weizmann Institute of Science, in Rehovot (near Tel Aviv), as well as at the rapidly emerging institution of Al-Quds University (Jerusalem) in Abu Dis, Palestine. I gave the latter presentation in my mother tongue, Arabic, a first throughout my career.

Only a month later, I was scheduled to present four lectures in four cities in China spanning 2000 miles across central eastern China.

While Hurricane Harvey was too remote to directly affect Florida, I could no longer use the consular services of the Chinese embassy in Houston (which serves the southeastern U.S. states) to get my visa. Instead, I resorted to my former city of residence, New York City, for a visa. As I contacted close friends in New York for an address I could use, Hurricane Irma was fast approaching Florida and forecast to directly affect my departure from Orlando International Airport. Realizing the colossal amount of time and effort it took my hosts to organize the tour in China, I was determined not to miss my connection to Shanghai from Newark, New Jersey.

Two days before schedule, I preemptively secured a flight to Newark from Orlando, just a few days shy from getting my visa. As a bonus, I actually ended up staying a couple of nights at the address I provided to the Chinese embassy in New York as my place of residence.

Landing in Shanghai for the first time was breathtaking, despite being welcomed by cloudy skies and intermittent rain. I had to quickly recover from my jet lag to give a presentation at Nanjing University the very next day, hosted by Professor Zunyao Wang and co-organized by Professor Virender K. Sharma of Texas A&M.

Following two days of learning about the fascinating history of Nanjing, I traveled to Wuhan University, in Wuhan hosted by Professor Wen-Bo Liu. Dr. Wen-Bo Liu was the lead author of recent publication in the Journal of the American Chemical Society that I co-authored along with Caltech Professors Brian M. Stoltz and Nobel Laureate Robert H. Grubbs and in collaboration with researchers from UCLA, Stanford, Scripps Institute in La Jolla, San Diego, and the Berlin Technical Institute (read it here).

All within the span of just two days, I presented a lecture at Wuhan University, learned about some of China’s history from my hosts, enjoyed a concert on 3000-year-old bells and hopped onto a high-speed train to Hangzhou. After a night of rest in a beautiful nature resort in the mountains, I started my Sunday morning thinking about the best way to introduce my lecture on the importance of understanding chemical mechanisms (details of the electron movement in molecules). On the prelude of my lecture at Zhejiang University, I decided to use a magic trick showing three ropes that appeared to have the same lengths but somehow converted into ropes of different lengths. Based on the applause from the audience, my unorthodox start to the lecture turned out to be a good decision, since I was able to demonstrate to them that science without full understanding would simply be magic; and if I were to reveal that magic trick, then the magic would simply become a science, which would upset other magicians.

I concluded my China tour in Beijing by visiting the campuses of Peking University and Tsinghua University and presented my last lecture at the Institute of Chemistry at the Chinese Academy of Sciences . My travels were buttressed by visits to the Emperors Summer Palace, the Forbidden City, and the Great Wall of China.

Summarizing the past few months of traveling throughout the corners of the world, it was an honor to impart the knowledge of chemistry to many people of different backgrounds and perspectives. To me, it further exemplified how fortunate we are to work and study at Florida Institute of Technology, the university with the highest percentage of international students, according to US News and World Report. Everyday, we work and study with a great diversity of people from different cultures and find that we are unified by scholarship and good science.”