Did you know that what is now Florida Tech’s Botanical Garden was once the site where American paleontologist Frederick B. Loomis found a number of fossils — particularly mastodon and mammoth bones? Wednesday, Oct. 11 is #nationalfossilday, and Melbourne has a rich paleontological history.

National Fossil Day is an annual celebration held to highlight the scientific and educational value of paleontology and the importance of preserving fossils for future generations.

Dr. Gordon Patterson, a professor at Florida Tech’s School of Arts and Communication, has always been interested in fossils. Years ago he spent part of spring break prowling through the botanical garden (also known as the jungle) and the tributaries of Crane Creek looking for the location where Loomis worked.

“There is a lateral feed to the creek running north underneath the two bridges (Shepherd Building), which I explored. I found evidence of the railroad that ran through campus in the early 20th century — Union Cypress Railroad. I was looking for mastodon bones,” Patterson said.

According to Patterson, one thing that made this area intriguing and stirred controversy was that a spear point was found in one of the mastodons that was excavated in the 20’s. “That raised the question of the role of human beings in the mass extinction of the large herbivores,” he said. “The debate continues.”

Dr. Patterson remembers a time when Bob Gross, who graduated from Melbourne High and went on to study archaeology at University of Florida, showed him a mastodon tooth that Gross had pulled out of Crane Creek.

“For a while, I would take my students to the Jungle and we would screen the sediment in the tributaries of Crane Creek running through the Jungle for fossils,” Patterson said. “We had quite good luck with raccoons and other small animals.”

Most fossils found in the Melbourne area have been divided among the Smithsonian, the Beneski Natural History Museum at Amherst, and the Museum of Comparative Zoology at Harvard University. 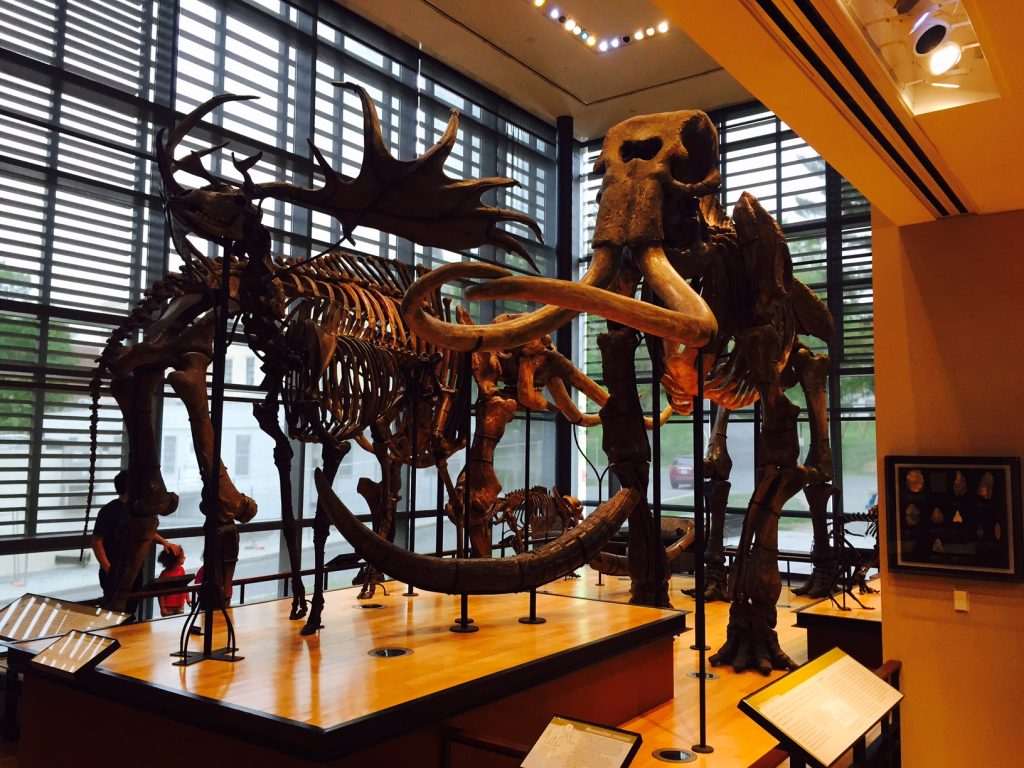 A photo from Dr. Kirk Johnson of the Melbourne mammoth on display at the Beneski Museum at Amherst College, mounted next to an Irish Elk (extinct and from Ireland) and a mastodon (which looks like a flat-backed mammoth).

Dr. Kirk Johnson, an American scientist and Director of the Smithsonian’s National Museum of Natural History, is especially interested in the paleontological history of Melbourne, Florida.

“Frederick Loomis was an Amherst professor and James Gidley [who worked alongside Loomis during excavations in Melbourne]  was a Smithsonian paleontologist. Since I went to Amherst and now run Gidley’s museum, the Melbourne connection is of great interest to me,” Johnson said.

According to Johnson, Florida has an amazing fossil record and much of it has to do with the ice ages when sea level varied quite a bit.

In the 1920s, archaeologists found human and extinct animal bones at the site of the current Crane Creek Reserve golf course off U.S. 192 in Melbourne.

Johnson said the site seems to be around 12,000 year old.

“The fossils from the Melbourne golf course include a whole suite of ice age characters including mammoth, mastodon, ground sloths, bears, dire wolves, sabertooth cats, horses, camels, deer, tapir, giant armadillos, peccaries, bison, beavers, and even squirrels,” he said. “The entire cast of the ICE AGE movie was found at the site on the golf course at Melbourne.”