Much of Florida Tech has changed since it opened as Brevard Engineering College on Sept. 22, 1958. The role of research has certainly evolved over the preceding six decades, and what was initially a place designed to offer engineering education to support NASA now does work with autism, sharks, the Indian River Lagoon, lightning, space and much, much more. 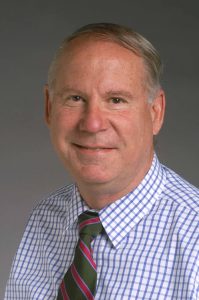 Allan Mense was at the heart of Florida Tech’s research expansion 30 years ago. As the first vice president for research at Florida Tech from April 1988 to March 1992, Mense initiated and executed programs that resulted in research funding increasing by 400 percent in less than three years. He negotiated agreements with research institutes and industry, federal and state laboratories and international organizations, and represented university interests in Washington, D.C. Seven major institutes and labs at Florida Tech, including the Space Research Institute and the Academic & Research Computer Center, reported to him.

As Florida Tech celebrates its 60th anniversary, Ad Astra sat down with Mense to discuss what brought him to the university, the importance of research, and being a part of Florida Tech’s history.

In the time before you came to Florida Tech, you held some important jobs, including project manager and senior engineer at McDonnell Douglas and chief scientist at the Strategic Defense Initiative in the Department of Defense. How did you end up at Florida Tech?

Lynn Weaver. When I was an undergraduate at the University of Arizona and picked up my master’s degree in nuclear engineering there, Lynn was the department head. Over the years, we kept track of one another. When I was working as the chief scientist for the Strategic Defense Initiative (SDI) program, Lynn called me when he had accepted the presidency at Florida Tech. He was previously the dean of the engineering school at Auburn and once he was selected as president of Florida Tech, I was one of the people he called and asked if I’d be interested in coming down there and being the first vice president of research.

The SDI program was all about research, so I had a fairly broad and comprehensive knowledge on the military side of research activities. Lynn interviewed me and a couple of other candidates and brought me down. I got to Florida Tech from the Department of Defense.

You started as a research scientist at Oak Ridge National Laboratory and were involved in research in one way or another for decades. How important is research at an institution?

It’s important in two or three ways. The ways that are obvious to others is that research is key to expanding knowledge in the world. For an engineering and science school, those areas were of direct practical interest.  I always indicated to faculty the need to be academically current on research in order to be better teachers and to convey the latest information to our students in an energetic way. Even if you’re teaching a freshman class in chemistry, the research examples you bring to class are the items that energize the students. Those examples, if they’re research you personally work on are typically with a lot more energy and insight than if you are just quoting from a textbook.

As we celebrate Florida Tech’s 60th anniversary, what does it mean to you to have played a key role in the development of the university?

It’s very, very interesting to see the evolution of Florida Tech over the years, I think Lynn Weaver was really the spark plug that got the university moving in the research direction. Through bringing money in from the Olin Foundation, he also got it moving, in terms of improving the university’s physical plan and infrastructure. I changed jobs, he retired, so the rest has evolved under other presidents, but when I was back there a couple months ago, I’ve got to say the university, from a physical plan point of view, is just fantastic. Originally, we just had three or four small dormitories on one side of campus and now we’ve got these huge living facilities for students. The campus has really turned into what I would call a major college campus from what it was in the formative days. I’m certainly proud the university has gone forward like that.

For more on Allan Mense and research then, now and in the future at Florida Tech, check out the upcoming Winter edition of the university’s research magazine, Discovery.