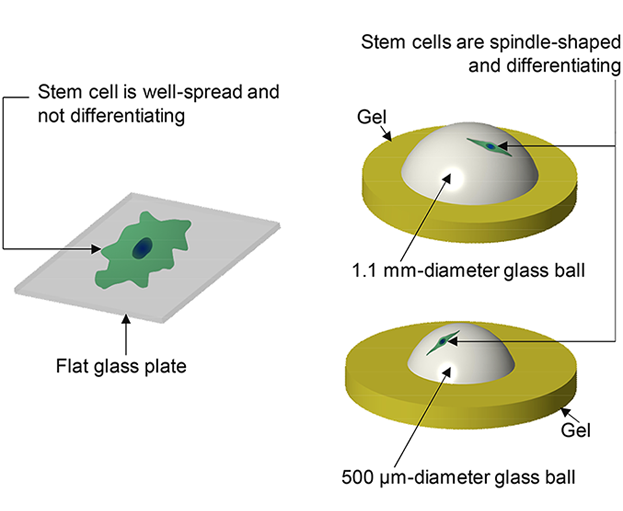 An invention by Florida Institute of Technology’s Shengyuan Yang was found to naturally narrow the spreading of stem cells and has the potential to induce and regulate their differentiation.

Using Yang’s patented and patent-pending technology, stem cells were grown on microscopic glass balls immobilized in a gel medium. Unlike the well-spread stem cells grown on a two-dimensional surface, the stem cells on the glass balls were almost uniformly spindle-shaped . More interestingly, this surface-curvature-induced-restriction in cell spreading also induced the differentiation of the stem cells.

These findings imply that the curvature of a substrate, as provided by the glass balls, may be utilized and tuned for cell and tissue engineering.

The research was recently published in Biotechnology Journal, which can be read in full here.

Yang’s team used glass balls with diameters ranging from 5 µm to 4 mm. They found that the minimum diameter of a glass ball on which a human mesenchymal stem cell (hMSC) can attach and spread is 500 µm. Their gene expression experiments revealed that the hMSCs growing on the glass balls with diameters of 1.1 mm and below were differentiating into fat cells without the addition of any differentiation induction media.

This means that surface curvatures of a substrate could potentially be designed and optimized to achieve or change a specific cell shape and function. And, due to the different sensitivities of different cell types to substrate curvatures, the particular curvature of a growth environment, such as glass balls of various sizes, may also be used to construct cell-sorting devices.

Based on the experimental findings, Yang has filed three patents to cover the applications of the concept of substrate curvature in sorting cells, in guiding stem cell differentiation, in directing cell attachment and spreading, and in inducing isotropic spreading of cells.

Some past studies have shown the role of geometrical cues in influencing the differentiations of stem cells on two-dimensional surfaces, but to date, the effects of substrates with defined-curvatures on the behaviors of stem cells are still missing. Yang said studies on the cellular responses to substrate curvature are necessary and critical for understanding the cellular behaviors in three-dimensional micromechanical environments and for designing effective and efficient three-dimensional micromechanical environments to control cell and tissue developments. With their unique class of curvature-defined substrates, micro glass ball embedded gels are able to systematically investigate the effects of substrate curvature on the behaviors of stem cells.

With this promising first published report, Yang’s group will continue to systematically investigate the effects of substrate curvature on the behaviors of stem cells.