Over 2 million people in the U.S. live with limb loss and despite advancements in prosthetic technology, 75% of amputees don’t use them. Discomfort, lack of usability, poor battery life, and cost are some of the reasons amputees opt out.

“I was genuinely surprised by the number of amputees who opt out of using available prosthetics. I understood the reasons why many don’t, but did not understand the scale at which this occurs until working on this project,” said Taylor Carter, biomedical engineering ’18. 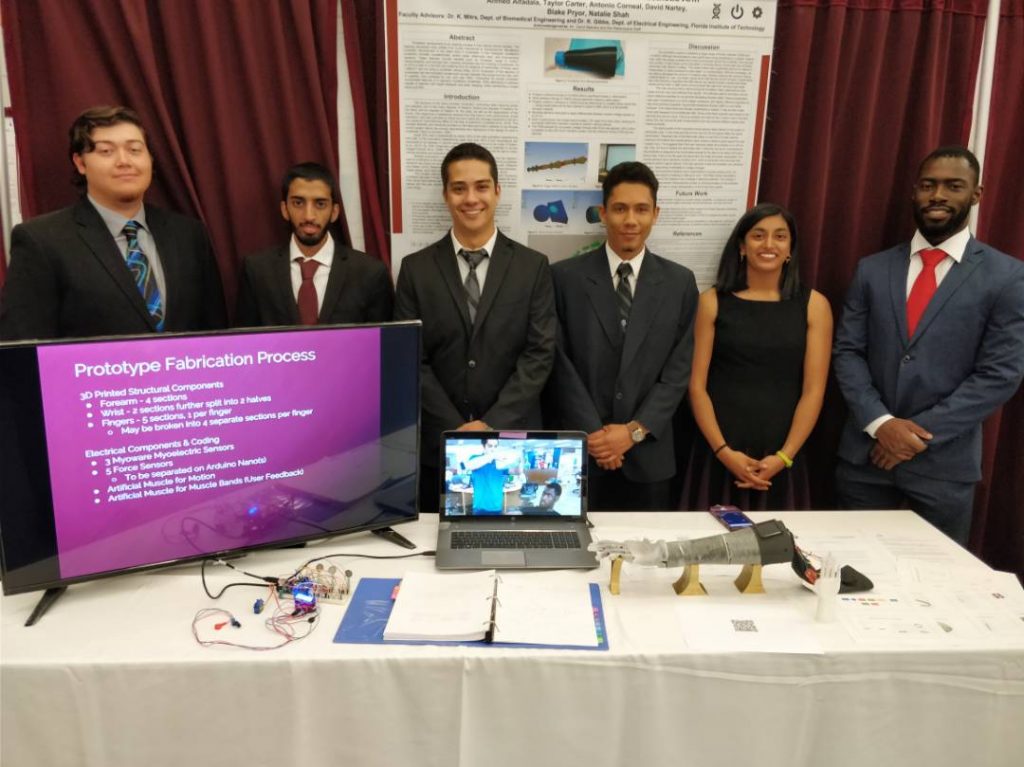 Their 3D printed prosthetic is comfortable to wear, easy to use, has high fidelity and is inexpensive. The prosthetic is controlled by arm muscle contractions and provides the user with touch feedback and mimics functionality and form of a real human arm and hand. Solar panels are embedded in the upper forearm for charging with a USB backup charger.

The design will be open-sourced so anyone around the world can make modifications.

“This project was inspired by the desire of multiple team members to create something akin to the field of neuroprosthetics, in which the mind is used to drive devices to help increase the quality of life,” said Carter.

The team remained as flexible as their prosthetic design, continually pivoting their ideas, designs and various options they experimented on.

“The ability to take an existing concept and repurpose it for something else is crucial in the world of engineering,” said Carter.

Although a working prototype was the emphasis of the project, they found that prototypes are not always executed perfectly on the first attempt.

“Embracing a mentality of fast failure and subsequent adaptation is a staple for good engineering.”

The team plans to continue to enhance their design by infusing artificial muscle and synthetic skin to provide a more lifelike look and feel.