Surrounded by miles of red sand and craggy outcrops, crew members inside the Mars Society’s Mars Desert Research Station in Utah can easily envision what life could be like living on Mars. 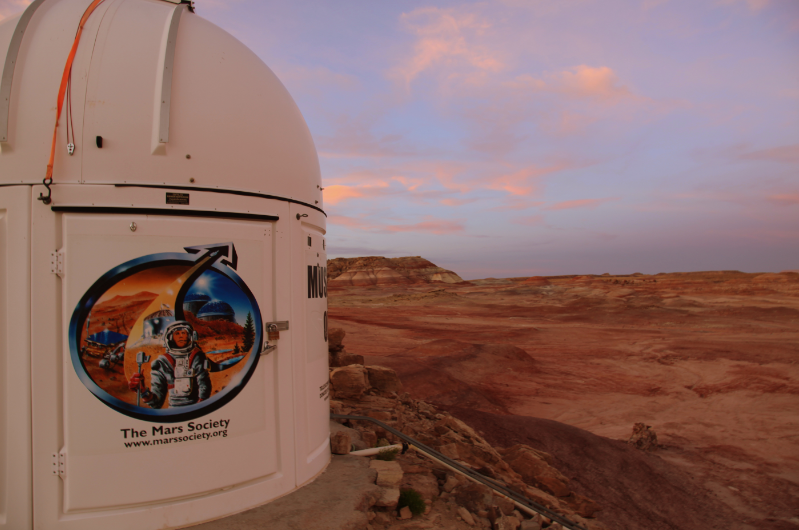 A Tradition is Born

Now, Tomiyama is passing the baton.

The United Nations of Mars

A team of students from the Astrobiological Research and Education Society will be the first group of Florida Tech students to participate in a mission together. Crew 205 will include students David Masaitis, Nathan Hadland and Hannah Blackburn. Together with crew members from Kuwait, Spain, Germany and England, they will be the pilot crew for the Mars Society’s International Emerging Space Leader program.

“While some think our diversity will be a point of contention, I view it as our grandest strength,” Masaitis says. “We have such a widely combined array of experiences between us that it creates a nearly limitless reservoir of problem-solving potential.”

ARES hopes that by bringing together scientists from different disciplines, nationalities and ages, it can break down barriers in science.

“Mars does not care who you are—science doesn’t either,” Hadland says.

One of the IESL program’s main goals is to observe how different leadership styles affect the crew.

“We are really excited to see how our group dynamics function, and we will be able to provide useful insight into leadership in Mars missions,” Hadland says. “I couldn’t be happier with the cross section of backgrounds, and it is already evident that we are providing fresh perspectives to each other as we plan the mission.”

The ARES team plans to take its project, Research to Advance the Development of Interstellar Horticulture, with them to the MDRS. The project is an experimental program through which students and faculty are testing different types of simulated soils, known as regolith.

“We have spent the past two years looking at how plants struggle in regolith and have been developing assays to qualify why they are poor substrates for plant growth,” Masaitis says.

As the Greenhab officer for Crew 205, Hadland will log all the time he spends on plant care, so he can compare it to the 2019-2020 mission, during which he will be replaced with their robot prototype.

“By comparing the amount of crew time spent on plant care as opposed to the robot, we can determine if the robotic system is a useful asset to have in Mars missions,” Hadland says.

“We are taking freshmen and sophomores with no experience and molding them into ideal candidates for future missions, so that we can build annual crews not just for the Mars Desert Research Station but for other habitability studies.”

ARES plans to continue to build a pipeline of crew members to the MDRS and is even adjusting some of its research projects to center around ongoing MDRS projects.

“We are developing a drone to help assist with EVA’s, we are working on developing an agricultural robotic system to help cut crew time spent on agriculture, just to name a few,” Hadland says.

Mars has captivated our curiosity for millennia, and its pull is strongly felt on campus. The passion to go there supersedes our gravitational ties to Earth.

“The Apollo missions demonstrated that setting lofty goals is the best way to drive technological advancement and inspire the next generation of scientists, technologists, engineers, artists and mathematicians,” says Aerospace, Physics and Space Sciences Department head Daniel Batcheldor. “At this point in human history, Mars is the loftiest goal.”

The Aldrin Space Institute is one of the main hubs for Mars-related research on campus, mentoring groups like ARES as well as other students and faculty on what it will take to get to Mars and what to do when we get there.

The research we do today will be the basis for exploration and colonization strategies. The goal might be lofty, but many think the future of mankind depends on building a colony on Mars.

By building partnerships with organizations like the Mars Society and NASA’s closed-habitat Human Exploration Research Analog mission, ARES believes that Florida Tech is poised to become the “Mars University.”

Check out why they think we should go to Mars