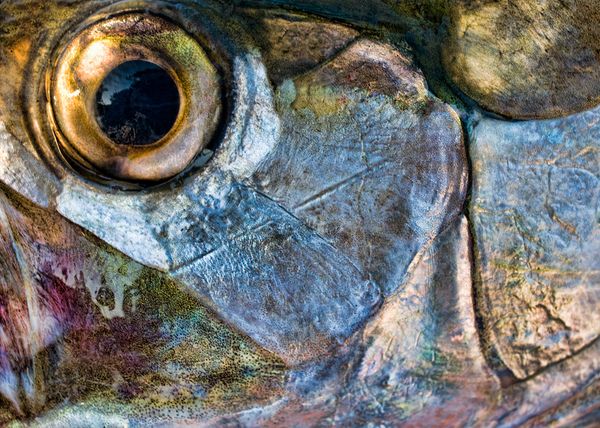 Sport fishing enthusiasts seek to lure tarpon, one of the most sought-after gamefish on Earth, but recently, the tarpon are luring in scientists.

Michael Grace, biologist and senior associate dean of science and his team of researchers have discovered evidence that tarpon retinas have an amazing ability to physically optimize cell function in their retinas to optimize vision in different light environments as the fish age.

Understanding how and why this happens could have major ramifications for treating and even curing blindness and other health-related ocular issues.

Tarpons begin life in dark, deep ocean incubators where little light penetrates. Correspondingly, the retinas in their eyes at that stage are all rods, the cells used to detect dim light. As with many aspects of the tarpon eye, this rod-only arrangement is exceedingly rare.

Then, as tarpon move to shallower coastal waters as adults, something extraordinary happens: their retinas develop cone cells, which detect color and are better in bright light, thus helping the fish hunt prey and avoid predators. And not two cone cells, as many mammals have, or three, as humans have: tarpon eyes develop at least five different kinds of cone cells by the time they are adults.

While humans can see a million different colors, tarpon may be able to discriminate 100 million or more. In other words, tarpon color vision may be 10,000 or more times better than human vision.

Armed with this knowledge that tarpon eyes change in response to the environment, Grace and his team are now delving into the how and why.

“That’s the final piece of this puzzle,” Grace said, “Are tarpon genes simply programmed to go through these changes or is there something about the environment that drives change?”

Based on research so far using electroretinography techniques Grace and his students developed to gauge sensitivity and how the eyes respond to colors, environment appears to be a trigger.

“The constant change over their course of life suggests they have the capacity to modulate – and fairly quickly, too.”

What makes this discovery important beyond tarpon, Grace said, is that science is eager to mimic the ways tarpon generate different cells to become super-seers.

“Humans and fish are made from the same stuff. We’re like Legos; blocks of the same stuff put together in different ways. If we can figure out how these eyes reinvent themselves throughout their life, we can apply that mechanism to the treatment of retinal disease or other neurological diseases.”

Find the abstract for the Visual Neuroscience article here.