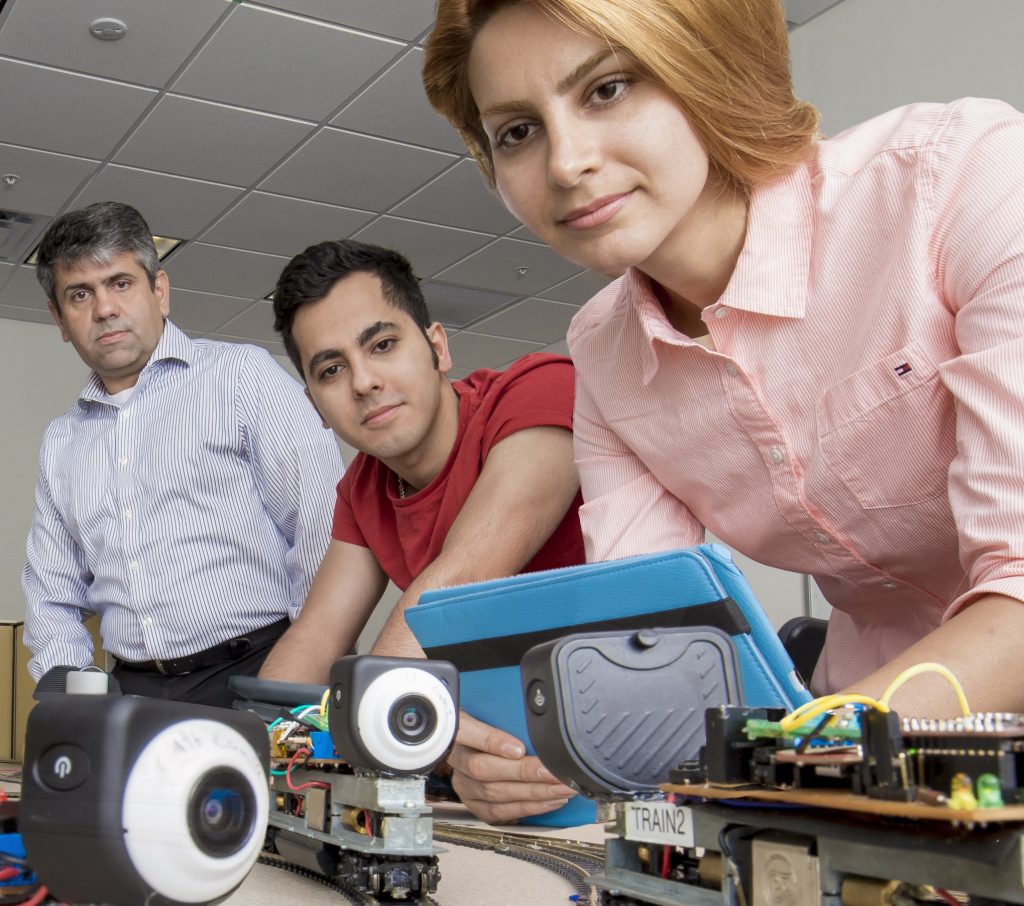 As three electric train cars navigate their tracks, the clicks and whirs coming from what could be a hobbyist’s set are audible. The locomotives rattle over miniature trestles and motor through potentially perilous junctions.

But it is what cannot be heard that ultimately makes this tableaux more appropriate for a laboratory than a play room:

As two of the cars head toward the same crossing, collision avoidance algorithms in a nearby server run the calculations and send information to hand-made circuit boards affixed to the top of each car. These processors take in the information, calculate other factors such as location and speed, and then determine how the train cars proceed.

At the junction, one car stops, allowing the other to safely pass.

“Humans can negotiate. We can understand when context changes, or problems arise,” said Marco Carvalho, dean of the School of Computing and executive director of the Harris Institute for Assured Information at Florida Institute of Technology. “But computers can’t do that.”

As Carvalho and his team of faculty and students continue their work, the concepts on display in this seemingly lighthearted project will, in fact, end up influencing some of society’s key technologies in years to come, from cybersecurity to autonomous vehicles to robot-filled factories.

“We want to get a computer to think more like a person,” said Tom Eskridge, an associate professor at the Harris Institute who specializes in artificial intelligence and cognitive modeling. “We want them to have their own view of the world, to predict what they would do.”

Rather than a Terminator-style dystopia, such advances could lead to improvements in safety, efficiency, transportation and more.

And the train set, which is almost like a virtual network manifested, is the perfect place to experiment.

The train set-up was inspired by highly mechanized factories where robots on a track move from station to station to complete tasks. The train stopping for a set period of time is akin to the factory robot completing one job before it moves to the next one.

The train system allows researchers to develop optimization algorithms that can return the favor by helping robots do their jobs in the most efficient way, said Adrian Granados, a research associate at the Harris Institute.

“To be efficient, we must avoid collisions,” he added.

Existing systems such as Tesla’s Autopilot use a host of different technologies to provide a high level of driver assistance, including cameras, ultrasonic sensors, forward-facing radar and a powerful computer to process all of this data.

Despite the amazing advances illustrated by these systems and their beyond-human capabilities, the train car experiments suggest a realm of machine interactions yet to be achieved.

The work researchers and students do with the train set will help answer those questions.

Because the train set uses an ad hoc Wi-Fi network allowing for free communications between the locomotives, it can also allow for research into cybersecurity.

“Consider each train car as a company, defending its system,” Carvalho said.

Cyber threats developed by students can be unleashed in the system, allowing others to work on methods of securing the ad hoc networks.

This work is often combined with a network security class that has students creating fully operational virtual companies and then protecting them from cyber-attacks.

“Because students use these tools and they see activity on the network that has specific signatures, they recognize that and can respond,” Carvalho said in an earlier interview. “Through this attack and defend process, they start to learn the traces that are only gained through experience.”