A continuation of previous biofouling and UVC research on naval ships, the new studies analyzed the anti-fouling effectiveness of three UVCs under multiple conditions. Richard looked at UVC-treated red or white colored surfaces to see which was more effective at preventing biofouling, as colored surfaces have been known to influence organism settlement. Richard also explored whether UVC worked in synergy with two surfaces of difference reflectance – stainless steel or polycarbonate – and lastly the efficiency rate of various levels of UVC exposure, such as weekly intervals and 10-minute intervals. While there was no variance in the biofouling for red or white surfaces when exposed to 254 nm UVC, reflectance studies showed stainless steel panels had significantly greater macrofouling settlement than polycarbonate, specifically among encrusting bryozoan, tubeworms and tunicates. Long, frequent intervals of light exposure were also found to be effective in reducing biofouling.

Biofouling creates many issues for ships, especially naval vessels that depend on speed and precision for various missions. Richard noted that minutes into being the in the water, the ship’s surface picks up a conditioning film that acts as a gateway for larger biofouling organisms. After the film, the microfouling process happens, which is when bacteria and other unicellular organisms, then days later macrofouling communities such as barnacles, sponges and tunicates, may begin to grow. This accumulation causes changes in surface roughness that lead to increased drag and emissions, as well as lower fuel efficiency. A ship with only a slight biofilm and no macrofouling can cause up to $1.2 million in fuel consumption.

For Richard, this was the first time working with UVC and biofouling lab work. Coming up with innovative ways to use UVC on different surfaces and finding new techniques to research its effectiveness led to an interesting experience. Richard noticed that while field research can lead to some surprising moments, one particular part of the work was truly unexpected.

“So, the whole goal was to prevent biofouling from growing on a surface that has UVC light exposure. So we had these lamps we used, and every week when I assessed my boxes, there was stuff actually growing on the lamp,” Richard said. “You wouldn’t think that would be possible, because that’s the thing exposing the UVC light, yet things are still growing on it. It kind of made you question what’s going on and how things are growing on it.”

While Richard noted it’s possible the organisms are settling during the time the light is off, it will be the source of her doctoral research, as she will look at how barnacles survive under UVC exposure. Richard noted being a part of the lab has opened her eyes to this type of research, as well as given her an expertise that she can use to help others.

“Just the whole entire experience itself is crazy to be a part of,” she said. 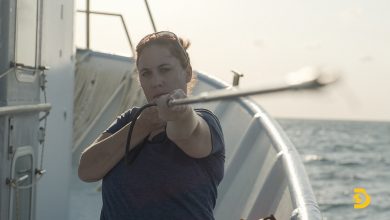