Retirees from Grumman Aerospace gathered on campus Oct. 12 to acknowledge the contributions of their former CEO, George Skurla, and to honor Florida Tech. Led by Bob Watkins, retired Grumman vice president and assistant to Skurla, the retirees made several gifts to the university, including photographs and paintings chronicling the history of Grumman. One gift was a replica of the plaque that was left on the moon as part of the Apollo 11 mission. The retirees also gifted the university with $1,000 earmarked for the purchase of Grumman memorabilia to be displayed on campus.

Attending from the Skurla family were Marie Skurla, George Skurla’s widow; and sons George Jr., Marty, James and Tommy. The reception was held in Skurla Hall, named in honor of George Skurla, and home to the university’s College of Aeronautics. Skurla was a longtime supporter of Florida Tech, serving on the Board of Trustees from 1979 until his passing in 2001.

Photos from the event may be viewed here: http://411.fit.edu/grumman-reception/index.php. 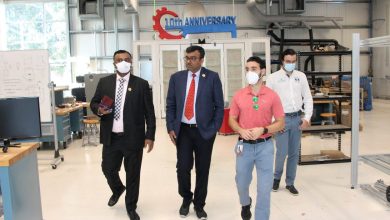