Most people wouldn’t shift industries toward the end of their career to work for an unheard-of startup. Jim Thomas ’74 isn’t most people.

When electric vehicles first hit American roadways in the 1980s, they often were derided as glorified golf carts for their limited range and lack of power. More than three decades later, a new generation of electric vehicles is upending notions of not only getting around but doing so with sporting panache.

In November, Michigan-based Rivian offered a peek into the future. The company, founded in 2009, dazzled the November 2018 Los Angeles Auto Show with its possibilities: the R1S, a seven-seat electric sport utility vehicle, and the fully electric-powered R1T pickup truck. Both promise performance and luxury in ways never before imagined in electric vehicles.

“We branded them ‘Electric Adventure Vehicles,’” says Jim Thomas ’74, Rivian’s vice president of corporate development. “Whether you’re on the street or off-roading, they’ve got really great dynamics as an electric vehicle.” 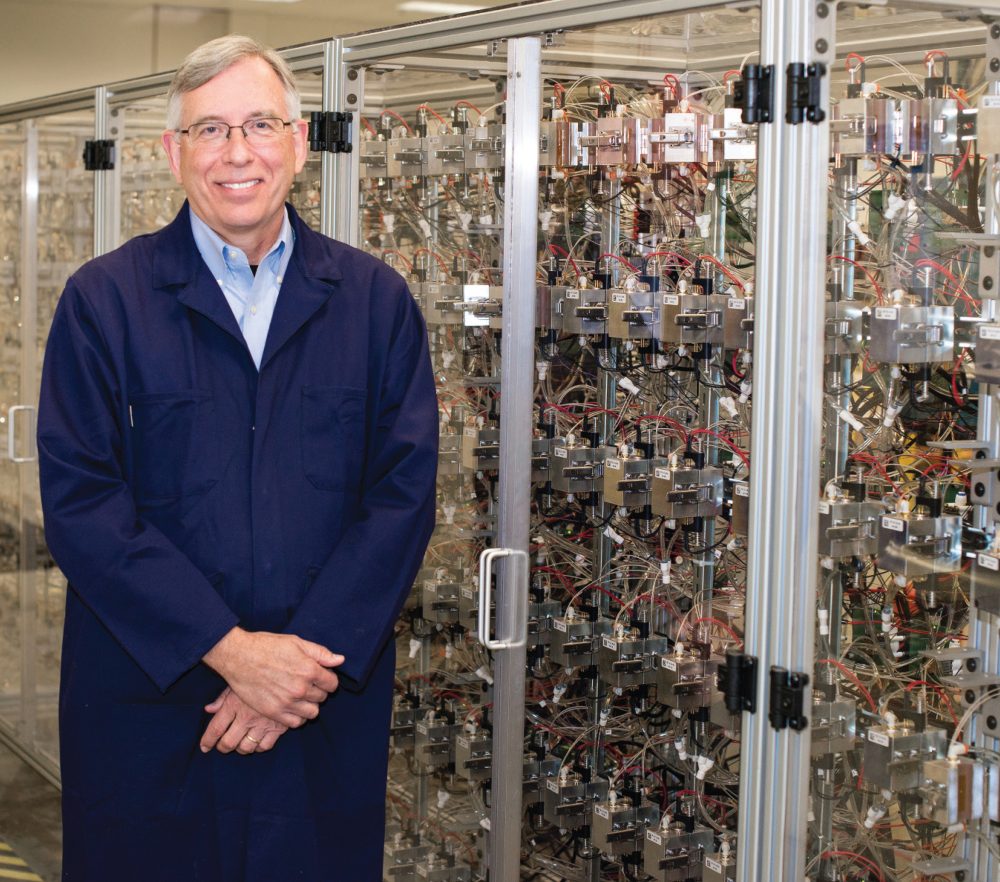 “We branded them ‘Electric Adventure Vehicles,’” says Jim Thomas ’74, Rivian’s vice president of corporate development. “Whether you’re on the street or off-roading, they’ve got really great dynamics as an electric vehicle.”

That Thomas found his way to Rivian is no surprise. Even as a math major at Florida Tech, he has always had an eye to the future.

In 1995, he helped to launch MapQuest, the first free online map service for consumers and a paid service for businesses. Much like he is doing at Rivian today, as MapQuest’s executive vice president, chief operating officer and chief financial officer, Thomas aimed to change a traditional business into something new.

“We had new technology that we had to apply to a traditional business and determine how we could meet customer needs,” he says. “All of the issues of management—the culture, the hiring, the financing, the marketing, the operations—those types of things really prepared me to help with what we’re doing at Rivian.”

While his technical knowledge has helped him in the industry, he credits his time at Florida Tech with helping him to get “a picture” of what it takes to succeed in business.

“I got an understanding that there’s great ways to apply that technology,” he says. “But also, courses allowed me to look at the broader picture and the strategic use of those technologies that would have broader implications than just a one-off application.”

Rivian appealed to him in much the same way that MapQuest did: It was an opportunity to help an industry transition, only this time, on a much more expansive, high-stakes scale that could also have a positive impact on energy sustainability.

Guided by many of the same questions that he had faced at MapQuest, like how to meet customer needs and expectations from both consumer and business points of view, Thomas is up for the challenge.

Today, about 10 years since Thomas left semiretirement to join Rivian out of excitement at the company’s prospects, Rivian is prepping its first vehicles for production at a converted Mitsubishi Motors of America Inc. plant in Normal, Illinois. 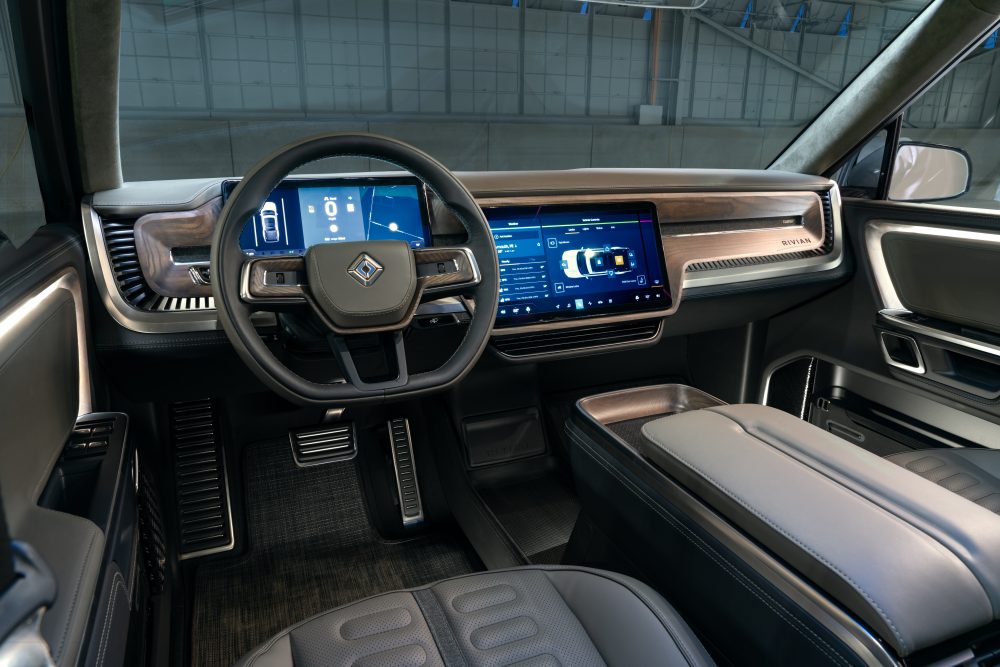 While early electric vehicles, such as the Nissan LEAF, were not particularly powerful, pioneering electric vehicle manufacturer Tesla Inc. is credited with changing public and industry perceptions with its cars that can operate on a single charge for as long as—or longer than—fuel-powered vehicles can run on a tank of gas.

Because electricity provides instantaneous torque, carmakers have tried to keep their cars light to maximize battery power in a market that increasingly has focused on sports cars.

But because most Americans don’t drive sports cars, in 2011, Rivian rethought the concept.

“With an SUV and a pickup, you need to be more than fast. You need to have durability, and you need to be rugged,” says Michael McHale, Rivian’s director of corporate communications. “So we have now developed products that carry on from Tesla’s proving of an untruth—the untruth being that electric vehicles can’t get wet, can’t be treated roughly and can’t be durable. That’s where we come in.”

The R1T is expected to be available to the public next year. Each of its wheels is powered by its own motor, giving it what’s known as torque vectoring, which allows each wheel to turn independently at a different speed.

“That allows substantial flexibility in an off-road environment, but it provides great acceleration on pavement, as well,” Thomas says.

The electric pickup is being lauded for its ability to reach 60 mph in three seconds. Further, it can tow 11,000 pounds. Following the Los Angeles show, Bloomberg Businessweek reported that Rivian will be taking “direct aim at the Ford F-150 Raptor and the truck offerings from Chevrolet and Fiat.” 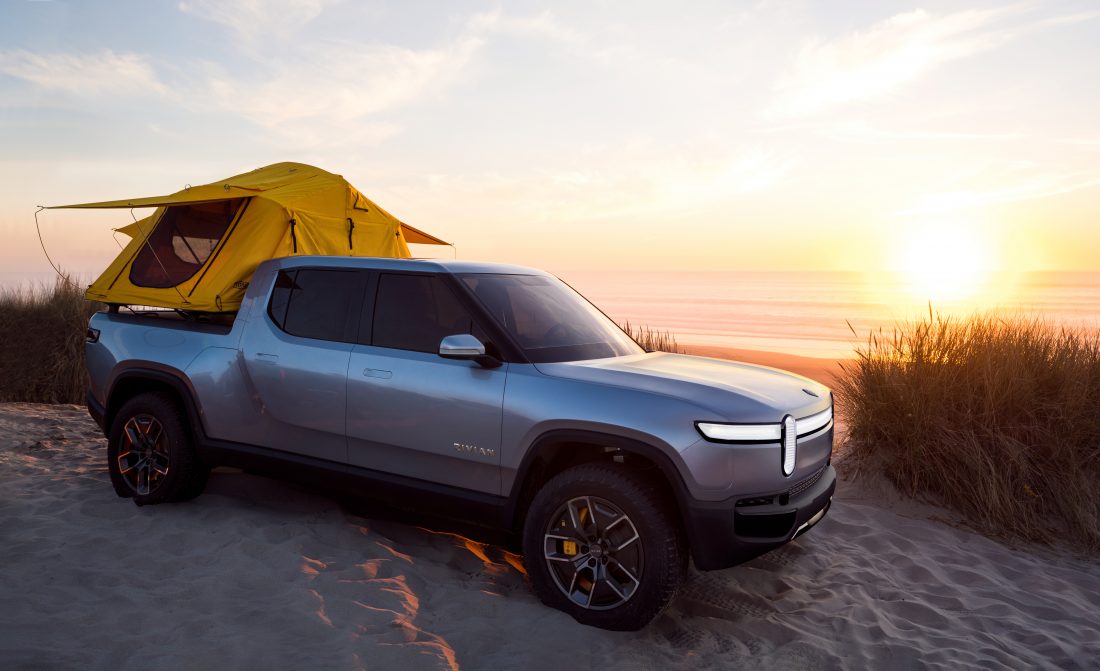 While almost one-third of the vehicles featured at the Los Angeles show were electric or relied on alternative fuels, Rivian’s efforts to create nontraditional electric vehicles have prodded other carmakers to consider the possibilities.

In February, Ford and General Motors Co. both announced that they plan to develop electric pickups, as does Tesla. Audi, meanwhile, has said that by 2025, 30% of the cars it produces will be electric.

“Electric vehicles are showing a great deal of sustainability,” Thomas says. “Not having internal combustion engine parts means that the motors on the vehicles can last a lot longer.”

But Rivian has loftier purposes, too, namely, creating a zero-emissions vehicle.

The company’s founder, Melbourne native R.J. Scaringe, is an outdoor enthusiast who launched the company to help people get into nature without harming it.

Gas-powered vehicles are considered major causes of global warming, with personal vehicles accounting for nearly one-fifth of all U.S. emissions. They emit about 24 pounds of carbon dioxide and other climate-warming gases for every gallon of gas used, according to the Union of Concerned Scientists.

While electric vehicles also have an impact on the planet, they are a big step toward reducing harmful emissions and increasing the sustainability of mobility. Rivian’s base models sell for between $68,000 and $70,000 before federal tax credits, which translate into a $7,500 savings. But as the industry scales up, prices will drop, Thomas says. Even in the short term, total cost of ownership of electric vehicles are quickly becoming equal to or less than vehicles with internal combustion engines.

Electric carmakers use higher-capacity lithium batteries, bundling hundreds, and even thousands, into a battery pack that can propel a vehicle for 400 miles per charge.

Some car battery cells are cylindrical cells that, at first glance, look like those found in a flashlight battery.

“But it’s how you manage those batteries that’s becoming more sophisticated,” Thomas says. “Rivian’s battery modules provide the highest density in the industry and have a technology-leading battery management system.”

Still, the day when electric vehicles comprise even half of all cars on the road could be several decades away, as the charging infrastructure develops and people lose anxieties about being stranded on empty batteries, he says.

It’s a concern echoed by Scott Benjamin, an assistant professor in the Bisk College of Business at Florida Tech and director of the college’s Center for Entrepreneurship and New Business.

“You’re trying to get people to change behavior, and that takes time,” Benjamin says. “There’s got to be a financial motivation for consumers. If there’s not an economic motivation, people are slow to adopt.”

“The people who are installing them now are doing so because they want to do what’s good for the environment. … If people had an altruistic motive, then everybody would have solar panels on their house.”

However, he applauds Rivian’s efforts to find a niche in the electric vehicle market.

“It’s taken decades, but the needle is moving in the right direction.”

While most aspiring electric carmakers promote themselves to raise capital, Rivian has relied on the largesse of private investors and, most recently, strategic investors. Earlier this year, Amazon led a $700 million investment round in Rivian, and Ford recently made a $500 million investment.

Thomas, for his part, works with governments, businesses and key industries to advance Rivian’s name, develop partnerships and leverage Rivian’s technology—like its vehicle skateboard architecture and platform and its battery control systems—for application in other products.

“There’s a lot of networking, a lot of meetings that I’m involved in and analyses of how we could partner with different groups—especially companies in industries that are facing significant disruption with the adoption of electric vehicles,” he says.

For the most part, though, Rivian has operated in what Thomas calls “stealth mode,” quietly pruning its products to show consumers that electric vehicles aren’t just for the highway.

“We’ve had an impact,” Thomas says. “We’ve made consumers aware of a new breed of electric vehicles and made other companies look at their bread-and-butter vehicles.”

This story was featured in the Spring 2019 Edition of the Florida Tech Magazine. Read the full magazine here.