Her office is housed in Amalie Arena, where the Lightning play, and part of her job is to attend home games to gather statistics.

“I get to go to the games and count it as working,” Ambrioso says. “Working in sports was really something I never thought I was going to be able to do—but here I am!”

Employing software developers to run numbers is common practice for professional sports teams, but hockey is just breaking into the practice, Ambrioso says.

“It’s very much on the ground level in hockey, so it’s very cool to be getting into it now, while there is so much change that can come,” she says. “There’s a lot of freedom to do things the way I want to.”

Ambrioso credits her Florida Tech education, particularly her senior design experience, with preparing her for the extensive interview process and, ultimately, the duties of the job itself.

In her senior design project, Ambrioso worked with Embraer to create a sensor system for tracking aircraft production using software that she uses daily in her job at VSG.

“Plus, senior design was basically, ‘Here’s a big project; figure out how to do it.’ And that’s exactly what I do in my job now—figure out the best way to get things done.”

The youngest and only female software developer on her team, Ambrioso also recognizes the value of teamwork and not being afraid to ask for help.

“My professors taught me that people want to help. We all have the same goal here, so I have no fear reaching out when I need to.”

YOUR SUPERPOWER: Eagle eye, I find money all the time.

PETS: I have a rescue dog named Penny.

USUAL WEEKEND ACTIVITY: Drinking lots of coffee and accomplishing nothing. 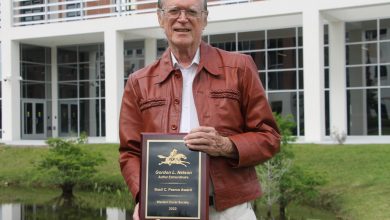