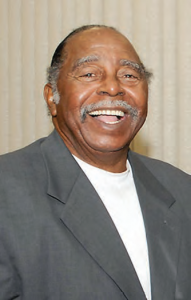 When an astronaut says, “You’re the bravest man I’ve ever met,” you know he is talking to someone special.

Leland Melvin made that declaration at the National Air and Space Museum in 2010 to one of Florida Tech’s first gradu­ates, Julius Montgomery.

A treasured advocate for and friend of the university in the many years that followed his graduation, Montgomery passed away Jan. 22 at age 90.

“Florida Tech is a better institution because of this brave and compassionate man, whose impact, thankfully, went well beyond our campus,” says Florida Tech President Dwayne McCay. “We will miss Julius dearly.”

In life, Montgomery didn’t sit on top of a giant Roman candle as it hurdled into space. What he did was face down the Ku Klux Klan and win a place of equality for African Americans at Cape Canaveral.

Montgomery was the first African American technical professional at the Cape, but he shouldered a burden other racial pioneers did not. Unlike Jackie Robinson, Guy Bluford and Mae Jemison, as Montgomery made his way to the build­ing that housed the RCA Development Lab, there were no columnists from the black press cheering and urging progress, no one from the NAACP to offer legal or moral support.

Reaching the lab on his first day, he opened the door to face a roomful of angry white men—many of them Klansmen—in the state with the highest lynching rate per capita.

“Nobody would shake my hand,” he remembered. “I got to the last fellow, and I said, ‘Hello, I’m Julius Montgomery.’ He said, ‘Look, boy, that’s no way to talk to a white man!’ And I said—I said, ‘Ah, forgive me, oh great white bastard. What should I call you?’ I really did say that! And I laughed, and he laughed, and he shook my hand.”

The award exists because at a pivotal time in the history of the country and our school, Montgomery allowed Florida Tech to remain segregated, at harm to himself but to the benefit of the institution.

His sacrifice and generosity were so significant that without it, the school would have been closed down.

“Tossed out on the street,” in the words of Florida Tech founder Jerome P. Keuper.

Florida Tech started as Brevard Engineering College (BEC) when Keuper, then a senior engineer in the U.S. Air Force Missile Test Project, told his bosses at RCA that he wanted to open a school to keep workers up to date on the state of the art in engineering.

BEC originated in three rented class­rooms at Eau Gallie Junior High School. Not too long after opening, the school found itself in the midst of a controversy started inadvertently by Montgomery.

Keuper had put up on an RCA bulletin board a notice asking people to enroll at his his new school. It also asked them to list where they had done their undergrad­uate work.

“I signed it,” Montgomery said. “I put down Tuskegee.”

Within days, the Brevard County super­intendent of schools was on the phone to Keuper, telling him the school system was canceling BEC’s contract to rent the classrooms. The superintendent said he was worried about traffic jams “and other things.”

According to Montgomery, he was one of those “other things.” As he told it, the superintendent said, “I’m sorry, but this fellow, here, is from Tuskegee, so he must be black. He cannot come to this classroom.”

The ultimatum was clear: Expel this black man, or close the school.

The next day, Montgomery said, while he was at his workbench, there was a message over the intercom: “Julius Montgomery, come to the office, please.”

There, he was introduced to Keuper.

“I said, ‘Yes, Dr. Keuper, what can I do for you?’ He said, ‘Well, I need your help.’ And the help they needed was for me to take my name off of that list so that he could start his new college.”

It would only be for a short time, Keuper promised. As Montgomery remembered, Keuper said, “As soon as I get my own buildings, you are welcome.”

That was 1959—five years after Brown v. Board of Education, four years after Rosa Parks stayed in her seat and said “No,” and just a few months before young men would sit down at a segregated lunch counter in Greensboro, North Carolina.

Montgomery sat and thought for a minute.

“I said, ‘Well, OK.’ For the better good of everybody, I took my name off the list.”

The school could stay segregated. He would drop out and not cause a fuss.

That Florida Tech created an award in Montgomery’s honor speaks to the existential nature of his decision. After that decision, the superintendent dropped his threat, and several years later, after BEC got its own buildings, Keuper kept his word: The school desegregated, and Montgomery re-enrolled.

Montgomery’s is one of many stories of the space program’s African American pioneers that are different from the civil rights stories that you read in the standard high school textbook.

Not everyone marched or said, “No.” Many did, of course, but others, like Montgomery, applied the principles of patience and, often, accommodation to reach the same ends.

Montgomery went on to have a success­ful career doing top-secret electronics work for the Air Force and shuttle support at NASA. He also became a politician, standing for elections beginning in 1956 and, finally, prevailing 13 years later, when he became the first African American to win a seat on the Melbourne City Council.

It’s easy to see all of that success as Montgomery’s legacy, but legacy is a diffi­cult thing to nail down. It can establish itself in so many unimaginable ways.

Melanie Tolbert ’19 M.S. wasn’t born when Montgomery opened the doors to African Americans at Florida Tech. Her parents weren’t even born. Montgomery didn’t know her, never knew her and couldn’t have imagined that she would follow the exact same trail that he blazed almost 60 years earlier.

On Jan. 13, a few days after Tolbert received her degree, she was in Gleason Performing Arts Center, where Montgomery received an honorary doctorate degree.

“I literally turned to the person sitting next to me, and I said, ‘Wow!’ We went to the same schools, and both of us for an engineering degree. There were no words,” she said. “It resonated with me emotionally. Had he not said, ‘OK, I’m going to bow out gracefully,’ who knows when the first black student would have integrated Florida Tech? It was exciting to know that we’d both attended the same undergrad and graduate schools, but it was also very emotional to know what he had to go through so that others, like me—a black woman—could have the opportunity to freely attend a school like Florida Tech.”

Montgomery died a few days after that ceremony, and it’s fair to say that Tolbert’s realization is a touching and fitting coda to a remarkable life and career.

“His legacy, as far as being a pioneer in his field, really has inspired me to not only go to work and fulfill the requirements that are placed in front of me, but to make an impact there and in my community—to also leave a legacy behind to say, ‘OK, I was there, and things are different now because Melanie was there.’ That’s what his legacy has inspired me to do.”

This story was featured in the spring 2020 edition of Florida Tech Magazine. Read the full issue here.