The thing they don’t tell you: We owe our life to photosynthetic plants.

Sticking with the green theme from my last post, I thought I would share a paper we recently read in my plant physiology class about comparing  photovoltaic and photosynthetic systems by Blackenship, et al.

Photovoltaic systems are solar powered cells that generate electricity whereas photosynthetic systems are the processes plants use to make ATP molecules (chemical energy). Sunlight is a good source for energy production seeing as the earth receives about 120,000 TW per year! However, sunlight intensity can vary based on geographic location and concentration making it harder to capture.

While both these systems seem similar because they use light to make energy, they are actually very hard to compare. Photovoltaic systems are often measured in terms of electricity produced. Photosynthetic systems don’t produce electricity, but instead store energy in the chemical bonds of molecules like ATP. Blackenship attempts to remedy this by measuring the photovoltaic energy in terms of energy stored in chemical bonds like those in photosynthesis.

But then we come to the question, in terms of efficiency, can we really compare the two systems? Photovoltaic systems are made with the sole purpose of harvesting sunlight for energy. While plants use this sunlight, their goal is simply to live and not to make the most energy. So, why don’t we just use photovoltaic systems if the plants don’t make us enough energy?

Because that would be a terrible idea. 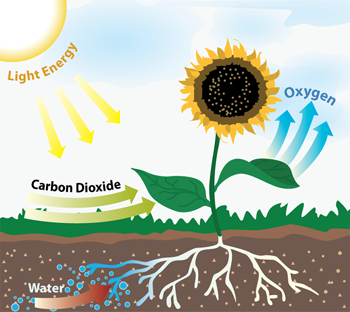 The key, in my opinion, is to find a balance between these two systems to make human life more efficient. We should be more concerned with finding ways to utilize our renewable resources – and we are. Scientists are working on both of these systems to make them better. A fault of photovoltaic systems is that they lose a lot of their energy as heat when the optimal energy level for the cell is overshot. Problems with photosynthetic systems is that they only absorb a small range of wavelengths of light. By addressing these issues, both systems could have greater potential in helping us with sustainable energy conversion in the future.

While this was just a simplified overview/discussion, if you’re interested in reading the real paper, I have cited it below. The real take away message I think, is that science is always evolving and progressing. This is the best thing about science! Hopefully in the future, problems like this will be overcome and contribute to a more sustainable lifestyle.

But of course, there will always be another puzzle to solve.