The thing they don’t tell you: The science fair reaches a whole new level in Brevard County.

What kind of college student agrees to being somewhere at 8 a.m.
on a Saturday morning? Well, this one apparently. Sleep is hard to come by when you are in school, but in my opinion, if you get enough sleep you aren’t doing college right. 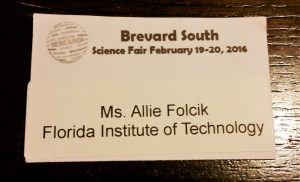 That being said, I woke up last Saturday, February 20 at 8 a.m. to judge the South Brevard Regional Science and Engineering Fair. Every year, the American Society for Biochemistry and Molecular Biology volunteers to judge science fairs in the area. They especially like us in Brevard because apparently biologists are in short supply.

Thinking back to when I was in middle and high school doing science fairs, many of the projects were basic and fairly uninteresting. But let me tell you, these projects were anything but.

Myself and another ASBMB member, Ben, were assigned to a special award given out by the National Oceanic and Atmospheric Administration. Their award, “Taking the Pulse of the Planet,” focused on NOAA’s primary areas of research, included weather and climate, marine systems, and transportation. 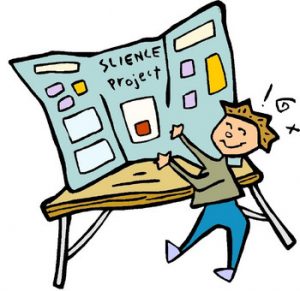 We were handed a list of pre-picked projects that met all the criteria of the award for us to check out. We were still allowed to look at any we thought fit the description, though. So, we headed out into the mall to start judging projects. Oh right, did I mention the fair was in a mall? That’s how many projects there were. They stretched down the center of the mall and also spilled over into the side flanks.

Some of the projects we got to view included comparing oxygen production of different algae to be used on Mars, building an intelligent robot to aid firefighters and creating a portable lightning detection device coded in three different languages! These projects were far from the baking soda and vinegar volcanoes that most associate with the science fair.

While it would probably be a legal thing if I told you who won the award, I can tell you that the person who received it definitely deserved it. The winners of the “Best of Show” award in each category will also move on to the national competition. If they keep up the good work, the kids at this fair are going places.

It was a great time on an early Saturday morning being able to learn something new and being able to get involved with the Brevard community. I wish the students the best of luck.

Results from the Fair can be found here.