Whether its the desire to be a pilot flying high above the land, 0r the person working in aerospace engineering designing spacecraft that soar high above the earth, the dreams we have are not easily altered.

But sometimes when life takes an unexpected turn, a new path appears to take you exactly where you need to be.

By the time he was 13, Luiz Fernando Leal had the rest of his life mapped out. It was a warm afternoon on Botafogo Beach in Rio de Janeiro when his uncle took him to see the Red Bull Air Race World Championship – the first year the competition was held in South America – where 13 pilots competed for the top prize.

“Watching the single engine planes fly and the supersonic fighters rip through the sky performing amazing stunts, I saw my future laid out before my eyes,” Leal said. “At that moment, I realized I wanted to be a pilot.”

The Brazilian native was so determined to follow this path that he opted out of attending a traditional Brazilian high school. Instead, He set his sights on the Preparatory School for Aeronautical 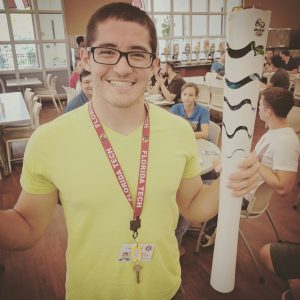 Cadets, a high school that prepares its students to become military pilots.

“Since its admission rate is one of the lowest in Brazil, I knew I would have to study extremely hard and take a high-level prep course to get ready for the written test,” Leal said.

But just two months before the exam, after almost a year of intense preparation, Leal was diagnosed with myopia (nearsightedness).

“I had memorized almost everything required to be a pilot and I was certain that pilots could not be myopic,” Leal said. “At that point, my world collapsed.”

But a close friend, Marco Antonio, refused to let him despair, telling him he was destined for an even better path.

“I thought he was crazy. Why would he say such a thing? After all, what could be better than my dream of flying planes? ” Leal said. “I thought he was a friend, but his words felt like a dagger in my chest and I thought to myself, Et tu, Marco?”

Refusing to give up his dream of becoming a pilot, he took the test anyway – and passed on a second attempt.

Though he would still need to pass a physical, Leal believed it would be possible to correct his nearsightedness through surgery before taking the eye exam. However, this hope was soon destroyed when two different surgeons told him he was too young to have the surgery.

It was difficult news, but Leal had already started down a new path without realizing it.

Another Way to Fly

Later that year, Leal won his first of many gold medals in the annual Brazilian Olympiad of Astronomy and Astronautics. He was twice selected to be one of 38 students chosen from almost a million to participate in both the Brazilian Space Camp and the Space Journey. During the weeklong intensive science programs, he had the opportunity to attend lectures by the first Brazilian Astronaut and Aerospace Engineer, Marcos Pontes.

“I learned about aerospace engineering  and how rewarding it could be to design spaceships and see them flying towards outer space,” Leal said. “Although I couldn’t fly a plane, I discovered a way to put my own ideas even higher than the sky.”

The comforting words of his friend suddenly made sense.

“I finally understood what he was trying to tell me. At the time, I was not prepared to accept the idea that there could be any other path designed for me,” Leal said. “But I realize now that life works in mysterious ways. If it were not for my first dream being crushed, I would not be aiming to become a Mechanical, Aerospace and Computer Engineer.”

He shared his revelation with Antonio.

“When I told Marco how his words had helped me to grow and understand that there was, indeed, another path for me, he simply replied; Well, Luiz, you haven’t lost your dream; you just found another way to fly.

But the battle wasn’t over; he needed to raise money to attend the school of his dreams – Florida Institute of Technology.

Hope for his Country

Stephanie Enstice, associate director of international admission at Florida Tech met Leal at an event and remembers his enthusiasm.

“He loved the size, location and personal touch we offer as well as the opportunities he would have as an undergrad and as a first-year student,” Enstice said. “He saw that our alumni were doing amazing things and making a difference and he wanted to be a part of this dynamic group.”

Enstice said the school did its best to assist financially.

“Even with our top award, which was close to $20, 000 per year, he did not have enough for proof of funds to get his visa document issued,” Enstice said. “He set up his own fund me page before this became more popular and rose quite a bit of money but still, this would not support him long enough.”

Leal’s initial goal was to raise the $14,000 needed for the balance of his tuition but he didn’t factor in the cost for room and board and was forced to ask for a gap year to raise more money.

During that year, Leal worked, studied and tried to connect with as many people and organizations that might be able to assist. He even created a power point to present to various institutions, hoping someone might lend a hand but nothing worked.

Time was passing and with less than a week until the end of his gap year and the deadline to register for the fall 2015 semester at Florida Tech, he still didn’t have enough funding.

That’s when his colleagues at the job where he worked decided to help. They joined together and informed the company’s media relations department about Leal’s plight.

A Little Help From his Friends

“They really enjoyed my story and decided to help me. I knew that I wouldn’t have enough time to register, get my passport, my visa and everything else needed to travel and start for fall,” Leal said. “But there is a good expression in Brazil; hope is the last thing to die, so I decided to give it one last chance.”

His supporters sent his story out to several newspapers and got the attention of O Globo, one of the biggest and most well respected news journals in Rio de Janeiro.

Within two days he was giving an interview to a reporter, who highlighted the fact that if Luiz didn’t get financial help soon – his dream would die – like many others from Brazil who have the talent and the drive to succeed – but not the funding to attend school.

When published, the article received a lot of positive feedback from readers.

“They saw me as a hope to help the country,” Leal said. “But for that to happen, I would need first to pursue the highest level of education in America.”

A Strong Reputation in Aerospace Engineering

The article got the attention of the Phi Institute, a philanthropic organization focusing on social causes in Brazil. 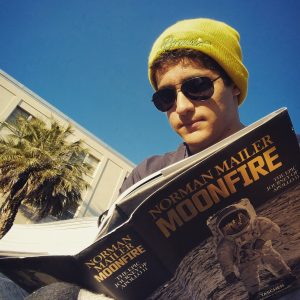 “He had the dream of studying aerospace engineering in the United States. He had learned English by himself and was admitted to three American colleges, including the Florida Institute of Technology, a reference in the industry.” Tizatto said. “However, his family would have to pay $20,000 per year and couldn’t pay for his studies.”

Unfortunately, by the time Phi reached out to Leal – wanting to learn more about his situation, his gap year and the deadline to register for fall, had elapsed.

“When I got the call they just told me they wanted to meet me to understand my story. I was very upset at the time, because I knew my gap year had already finished and I did not answer FIT,” Leal said. “Nonetheless something inside me told me that I should open my heart, open myself to show how strong my dream of studying aerospace engineering was and how devoted I was to it.”

Tizatto scheduled a meeting with a major donor.

“During the meeting, Luiz explained his trajectory, his future goals and how important going to college would be for his plan,” Tizatto said. “The potential donor was very thrilled with his impressive history.”

When the donor asked Leal if studying aerospace engineering at Florida Tech was truly his dream, he answered honestly.

“I answered from my heart and he told me he would help me,” Leal said. “I don’t remember what he said right after because I was frozen. He was in front of me, telling me that he would help with whatever it takes to see me conquer my dreams. I cried a lot after that. I couldn’t believe what I just heard.”

His benefactor asked to remain anonymous but kept his word, funding a scholarship for Leal through Phi.

Back at Florida Tech, Stephanie Enstice was happy to tell Leal that he could start spring 2016. 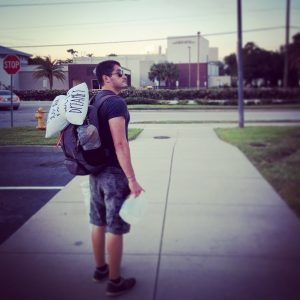 Now a year into his studies Enstice says Leal has fit right in to his new Florida Tech family.

“He is amazing and did so much already in his first semester here.  After an uphill battle, in which he persevered, he never gave up on his search for funding to attend FIT, his dream school,” Enstice said. “I know he plans to give back to his country and to FIT for all the support he has received. He is such an interesting and focused young man who is enjoying and taking advantage of every opportunity here.”

Opportunities that include being part of the NASA Hybrid Motor Rocket Competition where his team placed second out of 17 other universities and watching at his first rocket launch from Cape Canaveral.

“I’m already taking part in many projects and receiving opportunities that I would never have access to if I stayed in Brazil,” Leal said.   “I didn’t know how exciting it is watching, hearing, feeling a rocket going right up to the sky. It was such an amazing experience that I’ll tell to children, grandchildren and so on.” 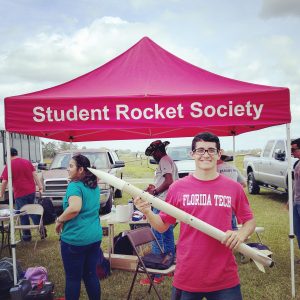 Leal also became a member of the American Institute of Aeronautics and Astronautics (AIAA) and the Student Rocket Society (SRS).

Leal said he hopes to use his aerospace engineering education to contribute to the expansion of human space exploration.

“I get goosebumps when I think that I can do something to help us to reach Mars,” Leal said. “My goal is to be part of something greater than me, greater than us – something carved in history.”

His short-term goals include enjoying the present moment and appreciating how an unexpected turn of events set him on this wonderful new path.

“My experience at FIT has been the most unique opportunity I have ever had in my life,” Leal said. “I can tell you this – I am living my dream.”

Whether you want to design aircraft or become the first person to explore Mars on foot, a degree in aerospace engineering from Florida Tech will get you there.