When you go running, do you go with your phone? It’s becoming more and more common to run with different apps and music, but does it really help? I got to work on a group project in the class Research Methods with Dr. Adrian Peter this semester, which let us look into the mystery behind these questions. 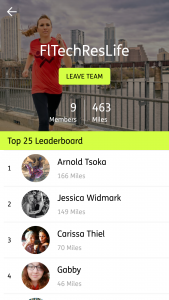 It all started out with finding six awesome people that were willing to run three times a week. We were lucky enough to get three girls and three guys involved from the Florida Tech student populous. Each person ran one week with no music, one week with a playlist made of Runner’s World’s top 32 songs for running and one week where they choose the music they listened to. We randomized the order of the no music, playlist, choice in music weeks to negate any influence from the order they ran the weeks in.  Each person was asked to keep as consistent of a routine as possible. This included outfits, paths, time of day, water and food consumption, and even type of weather. After every run, the runner had to submit their distance and time for the run on a google form.

Tracking distance and times were consistent thanks to the app, Charity Miles. Everyone used this app, so there was always a consistent form of tracking the mileage and minutes ran. Charity Miles tracks the distance someone runs using a GPS locator for outside running or a pedometer for inside running. Corporate sponsors donate to the charity of your choosing based on your distance ran. You can also create a team that tracks how far a group of people run together if that interests you, or you have a common charity you wish to support. 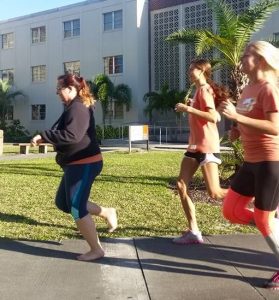 After we collected a large amount of data on the times and distances that each person ran for all three weeks, we calculated their running paces for each run. We compared distance and pace values based on different levels of music and different genders. Through some analysis of variances, we were able to determine that the gender had an effect on how far and what pace you ran, but the presence of music did not. What does that mean? Well, honestly, what it means is that we can not prove that music has an effect on running distances or pace. We do, however know that females had higher paces, and males ran further in our sample.

The next time your thinking of going running, know that if your phone battery is low, you don’t need to postpone your run. There is no proof that you can’t run as far or as fast with the benefit of music as you can without music.