The thing they don’t tell you: FIT Hockey takes on Louisiana

Saturday of the Louisiana trip yielded some leisure time now that both games had been played.

Though we were staying in Baton Rouge, we decided to take a day trip down to New Orleans. I had never been before and I was excited.

We started in the french quarter for some lunch and figured when in New Orleans, you should probably get some local cuisine. We ended up at a restaurant called the ‘Cornet’ over looking Bourbon street. Our party of 15 made lunch take quite a while but we stayed entertained watching the craziness that is Bourbon street. We saw a

living statue imitating Drew Brees, a man dressed as a wizard, and a party fire truck,

just to name a few. Lunch consisted of jambalaya or

gumbo for most (minus me the vegetarian).

After lunch we walked around town some more seeing the sites. The sun made its way out of the clouds making everything seem even more colorful. Aside from the plentiful bars of Bourbon street, there were musicians, street performers, and artists of all kinds. (Excuse the picture montage.)

The atmosphere was great but by 4 pm, and all of us running on about 5 hours of sleep, we hopped back in the cars and headed back to the hotel. The rest of the night we had some free time to grab dinner and explore Baton Rouge. Due to the LSU football game, you couldn’t walk through our hotel lobby, let alone a street, that wasn’t covered with people wearing purple and gold.

Rob and I decided to check out a place called ‘Pasttime Restaurant’ since it  was recommended to us. It was no surprise that the walls were covered head to toe in 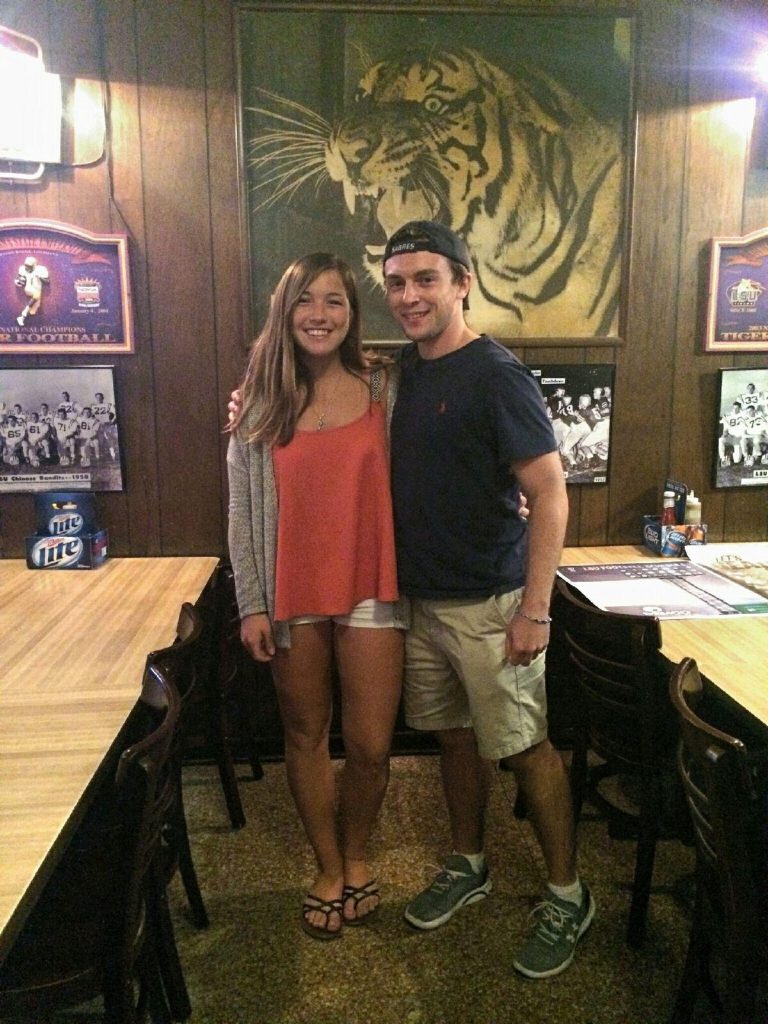 LSU memorabilia. Coming from a northerner like me, I just do not understand the south’s obsession with college football. But, it was good pizza!

rest of the evening was spent wandering the sites of Baton Rouge. Even though the sun had set, there was plenty to see. There are lots of cool monuments and statues in the area due to all its history.

We finally collapsed into bed to get some rest before the long drive home the next day. The drive home was just that too, long. Thankfully it was uneventful and we made it back in one piece. Things never end up going as you planned but you have to try and make the best of them. We ended up having a lot of fun and trying something new. Our next road trip is scheduled for the spring and we’ll see home many more things go wrong then.