The thing they don’t tell you: Florida Tech has an ice hockey team!

Yes, believe it or not we do. The team was established in in 2003, so actually, we’ve had this Florida hockey team for 12 years!

In the past, the team has struggled with its record due to a number of things including getting a committed coach and recruiting players — probably due to the whole hockey in Florida thing. However, coming from a school that until 2013 didn’t have a football team, ice hockey is a pretty well-attended event.

But this year, things are really starting to turn around. Last semester we were lucky enough to welcome a knowledgeable coach, previously from Southern New Hampshire University, who is dedicated to building the team. We’re getting more involved in the community and we played a game against a team from Patrick Air Force Base to raise money for The Wounded Warrior Project. This year, with a little extra work from the executive board, we were able to assemble a full roster with 4 goalies and 16 skaters! And this season we have a packed schedule playing teams like Louisiana State University, Tulane University, Florida State University, and University of Florida.

This weekend was our first batch of games against long time rivals Embry-Riddle. 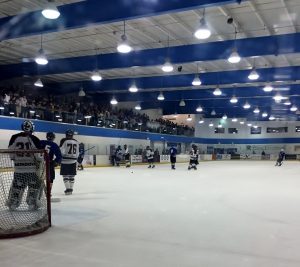 For those of you who don’t know, hockey is a pretty rough sport, and as teams go, Embry-Riddle is a pretty rough team. On Friday night the team made the trek up to Daytona and faced stands filled with the typical Friday late night college crowd. First games are always difficult for a team with new players because no matter how hard you try, you just can’t simulate game conditions in a practice, and it takes time to build up chemistry between players. The game was hard-fought, but the final score had Embry coming out on top 6-2.

The advantage to playing a team two times in a row though is you know what you’re up against.

Saturday night was in our own house, in front of our fans, which makes the game so much better. We came out with adrenaline-pumping (or at least I know I did) fueling off of our anger from the night before. After the first period, we were still down 1-0.

The second period afforded us one goal, but at the end of the second period, we were again down 2-1. During the intermission, the locker room was full of tension. But what we really needed to do was gather our heads, play our game and focus on scoring a goal. We were the better team — more disciplined, conditioned and skilled.

Going back onto the ice in the third period, we completely out-skated our opponents and scored 5 consecutive goals. Did I mention how good it feels to be in front of your own fans? The atmosphere was electric, charged by the cheers of the crowd as we got our first win in two years with a score of 6-4. 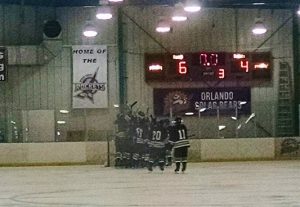 Over the past semester, we’ve all put in a lot of work trying to build up our team, but nothing feels as good as winning on home ice in front of your fans cheering you on. As we continue our season, I know we’ll be able to build off our victory and remain competitive against the later teams we face.

Hockey has been one of my greatest outlets in college in keeping me sane through all the stress and work. I am so lucky to be able to be a part of a great team of guys who all share the same passion as I do.

I look forward to what the rest of our season brings us because, “The nice thing about teamwork is that you always have others on your side.” – Margaret Carty