I slept through my alarm this Friday. Within a span of the previous 28 hours, I had had four exams, organised one program and attended two meetings. So, I didn’t beat myself up about not waking up on time. I ticked off things from my to-do list, added a few more and set off on my day.

It was a lovely morning, just warm enough to tantalizingly remind me that summer was just around the corner. I could hear birds chirping and see leaves rustling and falling to the ground in swirling patterns. I wondered what it would be like if we could see the wind, if we could make out the differences in air pressure that cause air to move and lead the crisp, dry leaves into whirling, swaying paths as they are pulled down to the earth.

Just as I was about to begin studying, I received a notification about one of the quizzes that had just been graded. My cursor wavered over the email as I debated whether or not I should look at my grade. Telling myself to not mope or sulk if I had not done well, I took a deep breath and opened it and let out an inaudible scream of joy; I had done well, really well! I cannot describe how satisfying and uplifting it feels when one toils day and night and then sees the positive outcome of one’s efforts. I called up my mom excitedly. She had wanted to talk to me for a few days, but I was splendidly busy with a ton of work which I was shoveling away. It was late night in India, but my parents were up so we could talk.

I had a meeting after my class and, instead of walking home, doing nothing for 10 minutes and walking back to the meeting, I just walked over to where we were going to meet. I met a bunch of friends and they brightened up my tired and weary self. Right after the meeting, a few of us went to see the SpaceX SES-9 rocket launch. We had gone last Sunday too, but the launch had been scrubbed. Keeping all our fingers crossed, we set off.

In the car, we discussed the constellations, the opposition of Jupiter and the pollution in my city. I’d never noticed the air pollution there much until I came to Melbourne. Now, I get a cold when I go home due to all the dust, the sky is not as blue as I can see it here, sunrises and sunsets reveal a thick haze blanketing the city, and finally, the river is now no more than a forlorn trickle of gray water. Then, we talked about the Indian Space Program, and finally mulled over what could have jinxed the SpaceX launch last time.

We arrived near the Banana River, which is not really a river and walked right down to the edge of the causeway. We could see the Vehicle Assembly Building far away on the horizon. There were a lot of people gathered already, everyone tuned to some broadcast of the launch. With cold winds lashing at us and the occasional spray from a huge wave hitting our toes, we held our breaths during the countdown, and scoured the horizon for a bright speck of light. Words cannot describe how beautiful it was. Perhaps I get too excited about these things because I am a space nerd, but it is fascinating to watch a rocket launch. 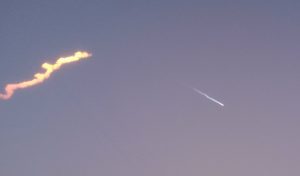 Contrails left by the first and second stages

I was all set to fall asleep (for a thousand years) when I returned home, but one of my friends was planning on watching documentaries, so I pushed my weary eyelids up with the excitement of learning something new. The first documentary was about plastic. It was heartbreaking to see how thoughtlessly and recklessly we are destroying our planet.

That got us talking about Rachel Carson’s book-Silent Spring, overpopulation, how bureaucracy gets in the way of sustainability, and what progress and modernization really mean if we are destroying our own chances of survival as a species.

We watched two more documentaries: one about wildlife in Indian deserts and the other about shallow seas. I was fascinated by how marine ecosystems are entirely spectacular worlds in all their vibrant, colorful and diverse wildlife and vegetation. I could not stop thinking of how the world is such a beautiful place.