Jerry Keuper and David Woodbridge were, a bystander observed, like two little boys on Christmas morning when the trailer parked in front of the president’s office. Three months earlier in September 1965, G.T. Smiley, manager of the Apollo Support Department at General Electric Corporation , arranged the donation of a 5-million electron volt, $150,000 linear accelerator to Countdown College (BEC/FIT). The cyclotron arrived just before Christmas. Jerry Keuper was ecstatic declaring that the machine “will create the finest nuclear laboratory of any Florida college.” Before workers could unload the device, David Woodbridge, chair of the physics department and erstwhile head of the college’s research efforts, climbed up on the atom smasher and delivered an impromptu speech echoing Keuper’s conviction that it was only a matter of time before Countdown College’s physics department was ranked as one of the best in the nation.

The “atom smashing machine” was, in fact, the first of two radioactive, holiday gifts from GE. Twelve months later GE donated a 10,000 Curie Cobalt-60 irradiation source to the college along with the needed radiation protection and remote operation hardware. The equipment, Keuper told a reporter “lends itself to an infinite variety of experiments.” Residents of Melbourne and Brevard County, however, Keuper quickly added, should not be “jittery” about college’s nuclear initiatives. Countdown College’s physicists were not planning to build an atomic bomb. Woodbridge and his colleagues had other interests. Keuper predicted that Woodbridge’s nuclear research would produce unanticipated results. No one could have anticipated that in the next three years the radioactive Cobalt-60 would embroil the college a local political battle, become the centerpiece of a full scale water purification project, and draw national attention in a story in Time Magazine.

David Woodbridge was an enigma. At a college defined by its unconventional character, Woodbridge was particularly idiosyncratic. After World War II, Woodbridge had pursued two different career paths. By day, he studied meteorology at the Spartan School of Aeronautics in Tulsa, Oklahoma. By night, he was the owner and chief instructor in the Revelle Dance Studio. A youthful encounter with Bill Markie, a famed vaudeville and burlesque house dancer, had inspired Woodbridge’s love of dance. There was nothing unusual, Woodbridge insisted, in his shared passion for physics and love for ballet, tap, and ballroom dancing. “Dancing and physics,” he explained, “are closely related. They both involve the conservation of momentum.” Before taking charge of research efforts at F.I.T., Woodbridge had left Tulsa for the West Coast where he attended the University of Washington and completed his graduate studies in physics at Oregon State. Later he worked at the Colorado School of Mines and served as a consultant at the University of Colorado’s High Altitude Observatory. In 1958, Woodbridge had joined Werner von Braun’s team in Huntsville, Alabama. Four years later Keuper recruited the tap dancing, physicist to lead the college’s research program . His colleagues at Countdown College quickly learned that Woodbridge possessed lots of momentum.

In December 1968 construction began on the $1.25 million dollar Crawford Science Building and college’s nuclear laboratory. Woodbridge planned to use the radioactive Cobalt-60 in experiments designed to explore “how space travelers will fight off radiation in outer space.” Before the construction was completed, Countdown College was swept into a dispute which pitted the university against the City of West Melbourne. Ever nimble, Woodbridge proposed using the Cobalt-60 facility to resolve the controversy.

The dispute grew out of the city of West Melbourne’s proposal to build a sewage treatment plant on one of the tributaries of Crane Creek. Keuper feared that insufficient thought had been given to the possibility that in an emergency the plant would dump raw sewage into the creek. “If any pollution of the stream that runs through our campus occurs,” Keuper warned, “it would ruin us. It would endanger the lives of the five hundred students who use the campus area.” Melbourne’s City Manager Dick Simmons agreed. An alternative solution was needed.

The tap dancing physicist had an idea. Why not use the Cobalt-60 source to purify sewage water? Behind the scenes Woodbridge and two other F.I.T. professors (Thomas Nevin and James Lasater) had formed a company, Energy Systems, Inc., to explore the use of radiation as a means of water purification and food preservation. “The principle we’re following,” Woodbridge explained, “is not very different from the beer processing principle.” He claimed that his experiments at F.I.T. confirmed the efficacy of Cobalt-60 process in eliminating up to “97% of the bacteria and pathogenic organisms.” With the addition of micro filters, both solid and liquid sewage could be turned into potable water. “The only problem” Woodbridge acknowledged was that Countdown College’s nuclear craft brew “taste[d] rather flat.”

By October 1968 Woodbridge and his confederates were aggressively marketing Energy Systems, Inc.’s “nuclear option.” In Jacksonville, the Mayor’s Advisory Committee on Water Pollution Control declared that they were intrigued. Woodbridge’s atomic scheme “dramatizes the kind of bold and uninhibited thinking,” the Jacksonville Times-Union asserted in an editorial, “that is needed to come to grips adequately with a worldwide problem.” Closer to home Woodbridge’s team won approval from the Brevard County Commission for the construction of “an atomic sewage treatment plant.” County Commissioner George King, Jr. “expressed high hopes” for Woodbridge’s nuclear “solution to pollution” being assured that “there were no hazards connected with the system.” Tests of Woodbridge’s “bio-nuclear sewage converter” took place in the newly constructed “25 feet by 4 feet in diameter” metal cylinder buried next to the seven story Crawford Science Building. Each morning a “honey cart” containing three to four hundred gallons of Melbourne sewage arrived on campus. The effluent was, then, pumped into the “nuclear irradiator” and passed through the filtration devices. Students irreverently dubbed the facility “the atomic toilet.” Woodbridge asserted that he and his colleagues at F.I.T. had come up with a radical “answer to the ancient problem of what to do with human waste.”

The initial tests of the “atomic toilet” were encouraging. Melbourne’s City Commission adopted a resolution approving the city’s participation in a three year “revolutionary pilot program in public sewage treatment via a nuclear reactor process.” Woodbridge asserted that the nuclear, biochemical reactor would produce a cascade of healthful benefits ranging from the recovery of “vitamins from the raw sewage” to “fuel burning products as well as drinking water.” Plans for Melbourne’s space age, nuclear sewage plant, however, ran into a roadblock. Environmental and health concerns led city inspectors to block the building permits needed for a fully operational facility. Woodbridge remained optimistic. His claim that Cobalt-60 could be used in food preservation caught the interest of one of Florida’s largest meat producing companies. Woodbridge learned that the Lykes Brother Company was planning to build a water treatment station on one of its ranches. Woodbridge approached the company’s executives and won their interest in his nuclear “solution to pollution.” The Lykes Brother Company agreed to fund a fully operational atomic water treatment facility on a campground owned by the company which was located west of Lake Okeechobee.

The $87,000 Fisheating Creek facility went on line in 1970. Each day the nuclear sewage treatment process produced 10,000 gallons of potable water. In its July 13, 1970 issue, Time Magazine profiled Woodbridge’s work in an article entitled “Sewage Tastes Good Like Water Should.” The title was a parody on a contemporary cigarette commercial (Winston Tastes good like a Cigarette Should.”) A picture of Woodbridge drinking a glass of atomically, treated water was prominently displayed. Yes, Woodbridge acknowledged “some people have a psychological barrier about drinking water they know comes from sewage treatment.” Ever adept at making pirouettes, Woodbridge declared “it’s going to be a matter of educating them.”

For once Woodbridge had overestimated his talents as an educator. The idea of using radioactive Cobalt-60 did not catch on. Concern about nuclear energy grew in the 1970s. The Fish Eating Creek nuclear sewage treatment station was not duplicated. At Countdown College the “honey cart” ended its daily deliveries. Woodbridge took up other projects. In 1972 watching his son play with a “Slinky” toy led him to form a company called Aqua-Magnetics with the goal of creating a machine that would use tidal currents as an energy source.

At Countdown College Woodbridge became the head of the college’s science education department. By 1977 he was ready to move on. He left the university to seek for a new venue for his dancing and physics career. The source of radioactive Cobalt-60 remained buried beneath a small kiosk next to the Crawford Science Building. In a fanciful moment, Keuper ever eager to attract students to Countdown College, suggested that the “eerie blue glow given off by the cobalt” might make for a highlight in campus tours. The admission’s office, however, demurred. The “atomic toilet” remained dormant until 1981 when John Miller and Keuper decided to decommission the nuclear facility. All that remains of one of Countdown College’s most imaginative endeavors is a small, tattered kiosk and the underground passage way linking the “atomic toilet” to the Crawford Science Building. All things must pass. Little boys grow up; memories of past Christmas mornings fade; and, at Countdown College the “atomic toilet” has found its rightful place in the dust bin of history. 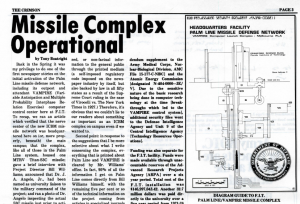 Note: In 1970 when the Crawford Science Building was constructed there were only sufficient funds to purchase a single elevator. Two elevator shafts were built with the expectation at some point the university would have the funds to purchase a second elevator. Seven years later in August 1977, the Crimson, Florida Institute of Technology’s student newspaper published a whimsical article entitled “Missile Complex Operational“ maintaining the empty elevator shaft housed Countdown College’s clandestine nuclear tipped MTRV Titan 83C missile. Dave Woodbridge, who passed away in 2010, offered “no comment” on this claim.