In 1965, Gene Pitney, America’s wholesome response to the Beatles and Rolling Stones British invasion, recorded a hit tune entitled “Don’t Take Candy from Strangers.” Forty years later a somewhat less than winsome Britney Spears picked up this refrain in her 2008 comeback album. In the early 1980s, three Florida Tech students set out to prove Mom and Dad, Gene Pitney, and Britney Spears wrong. They went on a campaign to prove you can take candy from strangers. For the better part of a year, students making their way across campus would encounter three masked individuals handing out candy. This is their story. 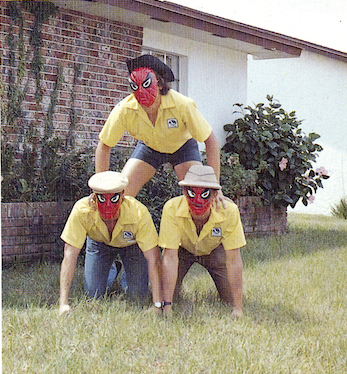 It began as a lark. Three ocean engineering students, Drew Roberts, Peter Raducha, and Erick Reyna decided to add a bit of zaniness to FIT during their senior year. Roberts and Raducha were hard at work on their summer marine field project. One day Roberts’ younger brother, Sean, returned from the Seven-Eleven on Babcock Street with a package of Zotz Fizz Power Candy. What made the hard candy unique was that each piece had a flavored fizzing center. Drew Roberts and Peter Raducha were charmed. By the end of the summer, Roberts and Raducha had drawn their roommate, Erick Reyna, into their plan. The three honors students christened themselves the Zotz Brothers and swore an oath of loyalty declaring “all for one and Zotz for all”. Their mission was to bring a bit of whimsical fizz to Countdown College.

Later Peter Raducha explained that the Zotz Brothers felt it their “mission from God” to make people laugh. “At FIT there’s a lot of technical courses,” Raducha continued. “There’s a lot of pressures. People get really wrapped up in the pressures, the grades.” The Zotz Brothers decided to “break the chain of depression.” Using the house they shared on Auburn Avenue as their base of operations, the Zotz Brothers formulated their plans. Their idea was to periodically appear on campus wearing Spider Man masks and hand out candy to students, faculty and staff.

By November 1980, Roberts, Raducha, and Reyna were well on their way to “Zotzifying” Countdown College. The Zotz Brothers talent at improvising fizzy encounters produced a cascade of quizzical looks and raised eyebrows. Professor Ed Kalajian recalled his surprise in arriving in his ocean engineering classroom to find a piece of Zotz candy on the lectern. His surprise turned to wonder when he returned to his locked office and discovered a piece of Zotz candy on his desk and, here is the mystery, the Zotz Brothers had attended the class. 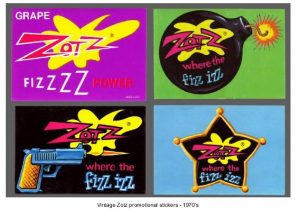 Giving away candy and mystifying students and professors, however, proved costly. Roberts remembers that “at some point we wrote to Andre Prost (the candy manufacturer) and gave them our story and asked to be able to buy the candy at wholesale or cost.” A few days later a surprise arrived in the mail. Andre Prost had sent a huge box containing 3840 Zotz Fizzes, along with Zotz T-shirts, Zotz stickers, and a small assortment of other candies. “We were,” Roberts declared, “in business big time.” 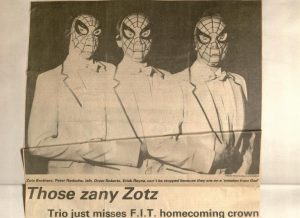 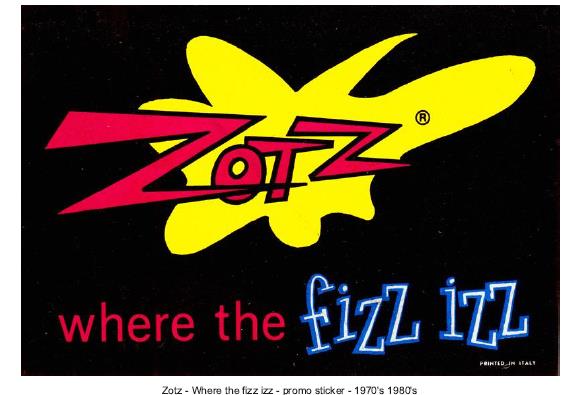 The homecoming election results were announced on Friday night. Sadly, the Zotz Brothers were runners up. Years later, Drew Roberts observed that at the time the election results were questioned. Was the election rigged? Was the 1981 Homecoming vote count an eerie anticipation of the “hanging chad“ 2000 presidential election? “Conspiracy theorists to this day,” he explained, “think the vote was rigged. At least that’s what a lot of people on campus told us.”

A failed election bid, however, did not take the fizz out of the Zotz Brothers. Roberts, Raducha, and Reyna graduated with honors in June 1981. All three went on to successful careers. They never gave up, however,  on their mission to make people smile. Perhaps there is a lesson in their zaniness. Maybe you can take candy from strangers. So, if you are walking across the Quad and offered some candy, you might consider taking it. Ad Astra per Zotz!