The things they don’t tell you: about sexism in sports.

How many times have you heard someone say, “you play like a girl”? The phrase usually has a negative connotation. Is it sexism? One guy will make fun of another for a bad throw or a bad play, and the synonym is that they “play like a girl.”

My entire life I’ve grown up playing and watching sports and I’ve come across this expression a number of times. With intent to insult, it makes me wonder when it was that it became ‘not okay’ for a girl to be in sports. All the sudden the comradery and encouragement become separation and derision. Somehow, somewhere, we become more of an opponent than a teammate.

Well, for starters it’s ingrained in our society. NPR recently did a segment on sexism in the Olympic broadcasting.

When a female Hungarian swimmer won the gold medal and set the new world record in the 400 meter medley, they immediately panned to her husband and coach, saying he made it happen. Looking at the top 25 highest paying athletes as reported by Forbes, there’s not a single female on their list. This article in Women’s Health UK is about a female physiotherapist’s struggles working in the men’s European soccer leagues. Or even worse yet, the Legends Football League, a women’s football league where they play in lingerie, is blatant objectification.

I’ve experienced sexism again and again as a female athlete. In high school, I distinctly remember a game I played my senior year against Laconia. I was the captain of our men’s hockey team and a parent in the stands started yelling at the referee claiming, “girls don’t belong on the ice.” Unfortunately, this kind of attitude followed me all the way through my time playing with the Florida Tech hockey team.

But I’m not the only one. I asked my fellow female athletes about their experiences with sexism in the game and got similar responses:

“I get told all the time that I shouldn’t play rugby because it’s too physical. Apparently it isn’t very ‘ladylike’ to be covered in bruises.”

“I always hear that men are more capable and can push themselves harder, but that’s across all sports…”

“One of the guys told me once that he only liked having a female coxswains because the male’s should be rowing the boat, not just sitting around.”

So what do we do about this? To start, we need to find a way to break 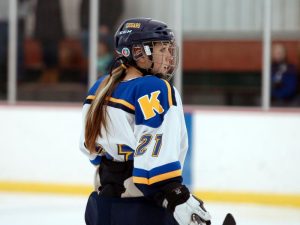 these persisting stereotypes. It’s time to get girls on an even playing field. Because a sport isn’t about a gender, it’s about the love of the game itself. But nothing will change unless we get the ball rolling.

It’s time to put a new meaning behind, “you play like a girl.”