Rebecca McFadden is pursuing her degree in biomedical engineering and mathematical sciences and has interned with NASA. She is the President of the Society of Women Engineers and the Vice President Service of Alpha Phi Omega as well as a Student Government Senator

From a young age, I knew that I wanted to help people, but I didn’t know how. Throughout school, I found myself excelling in math and science, but I wasn’t really drawn to a STEM career. I didn’t have much exposure to the world of science or engineering until high school when we started working in general biology and chemistry labs. There was something about making a hypothesis and trying to prove it that I was instantly drawn to. Once we got into microscopy, I was hooked. I started researching STEM fields until I found biomedical engineering, and the rest has just been living out that dream.

Women are intimidated by STEM fields at a young age. I remember in school being told that girls were better at reading and writing, while boys were more advanced at math and science – but neither of those are true! Our society falls into the trap of stereotypes, and it’s imperative that younger generations don’t feel limited by their gender.

Another challenge I’ve observed is a general fear of the future for women. We’re worried about going into the workforce because there are horror stories of women being mistreated and devalued – but those women pushed forward so that the younger generations wouldn’t have to endure the same struggles. I think it would be a disservice to those who came before us to go this far and be dissuaded – we should embrace life after graduation. Let people challenge you, and then rise to meet them.

Personally, I’ve been very fortunate to work in open-minded environments. As an intern at NASA, I was appreciated for my hard work and dedication. If I failed, no one thought that it was because I’m a woman, but because of something I just didn’t catch. However, I know that many are not so lucky.

Raise your hand more, don’t be afraid to speak up in class. Yes, you’re smart, and yes, you’re a girl – why does that have to be a bad thing? Never let your gender be a reason someone stops you. If you fail, and everyone will eventually fail, don’t think you came short because you’re a girl. Learn more, try harder, but never be discouraged because you’re a woman.

Why not try? Only you can be responsible for your successes and your failures. Don’t let anyone tell you differently.

It’s easy to assume that there aren’t many women in STEM, but it’s another thing to actually see it. In many of my math courses, there are very few women, and it can be intimidating. However, this made me understand that the only way to change this is to do something – I ran for President of the Society of Women Engineers because I wanted to make sure we reached out to the younger generation, so that eventually our class ratios could be more equal.

In your experience, what are the top things leaders could do to encourage younger women to enter stem fields?

When speaking to an engineer or scientist, you can see their passion for their research. I think it’s important to show this passion, and remove the image of the dorky, boring scientist. The Space Coast section of Society of Women Engineers hosts an amazing event called Introduce a Girl to Engineering. They spend a day hosting workshops based on engineering – from designing a client-based ice cream sundae to melting polymers to make jewelry. These activities are fun and they engage the girls; most of them walk away excited to pursue STEM! Having an event like this is every community could lead to a very different world.

However, it is also important to be honest – STEM fields are extremely difficult, but they’re also some of the most rewarding jobs. Young women should know that they’re going to have to work hard, but at the end of the day, it can be fun proving stereotypes wrong. Empower young girls to face challenges head on. 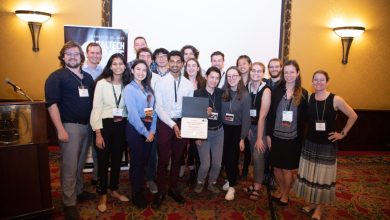