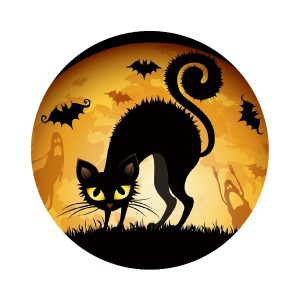 30 years ago, urban legends of a supernatural presence in the now bygone Roberts Hall Annex rattled the students that lived there and piqued the interest of the Melbourne Times.

The Woman in Black

The cat arched her back when she sensed the presence. Mike*, an F.I.T. student and member of the university’s crew team, had just gotten into bed. He was in his upstairs bedroom in the Roberts Hall Annex at the Anchorage. He had not locked the bedroom’s door. Later, Mike told Weona Cleveland, a reporter for the Melbourne Times, that the cat made a noise and when he looked at the animal, he saw the shimmering outline of a woman dressed in black sitting at the foot of his bed. Mike bolted. This was the first, but certainly not the last time that the woman in black made her presence known.

Things that go Bump in the Night

These events took place more than thirty years ago when the Roberts Hall Annex served as a dormitory for eight members of Florida Tech’s crew team. Strange things had begun to happen. Initially, team members began to hear clunking sounds in the night. In the morning, they would awake to find that objects had been moved. Oars which had been securely attached to wall racks would mysteriously fall. Then, there was the woman’s voice which called out in the night. When Mike saw the woman in black, he sprinted down the stairs. He told the Times reporter that he was afraid to go back to his room and spent the night sleeping on the living room couch. A few weeks later he moved out.

Other members of the crew team reported inexplicable incidents. Dan*, another Florida Tech rower, moved into the upstairs bedroom after Mike left. Both men adamantly maintain they never discussed ghosts or the woman in black. Shortly after moving in, Dan recalls feeling the “presence” of something abnormal. During his two years at the Annex, Dan began to have unsettling dreams. He felt that something or someone was trying to communicate with him. “When you’re sleeping,” he explained, “you have sixth sense that someone is watching you sleep.” On several occasions as he awoke, Dan saw a shadow flit across the end of the bed. Like Mike, Dan began to sleep on the downstairs living room couch.

Rumors, all unproven, abound about the haunting of Roberts Hall Annex. One account has it that a woman was found hanging in the Annex’s basement. An examination of newspaper clippings and police records contain no reports of an incident like this. The Annex, however, does have a basement where the reclusive owner kept the carcasses of animals that he had killed. Another story has it that the owners of the house constructed a crypt in the basement for their internment. No crypt has been found. Moreover, the owners left instructions in their will that they be cremated, and their ashes strewn over the Sebastian Inlet. Perhaps most fanciful of all is the story that across the street from the house was a notorious bordello where “unspeakable” acts of depravity occurred. The only verified fatality that happened near the Annex was the accidental drowning of a woman named Pennie Scott Hall in 1921. Could Pennie Hall be the “woman in black?”

A Brief History of the Annex

What is known is that a prominent Melbourne couple named Roy and Florence Couch built the house in 1940. At the time, the Melbourne Times reported that the construction cost was somewhere between $15,000 and $20,000. In February 1941, the Couch’s moved in. Roy Couch, the “inventive owner of the Couch Manufacturing Company in Grant,” died nine years later of a heart attack at Sebastian Inlet. Family members recall the Couch’s as “not very social people.” They had few visitors. They rarely entertained preferring to keep to themselves. The couple made it clear that they did not want children and left no descendants. Roy Couch liked to hunt and fish. That is why he had the basement cooling room. One thing was noteworthy. The Couch’s let it be known that they slept in separate bedrooms behind locked doors on the second floor. After husband’s death, Florence Couch invited her deaf-mute sister and husband (also a deaf-mute) to join her in the house. Florence Couch died on December 1, 1968. No record has been found of what became of her deaf-mute in-laws.

Florida Tech acquired the Couch house as part of the settlement of Florence Couch’s estate shortly after her death. A year earlier in February 1968, Jerry Keuper and Fred Roberts, a university trustee, announced that the college planned to launch an intercollegiate crew program. Roberts, who owned the boathouse and the property adjacent to the Couch House, volunteered the use of the boathouse to house the two eight-man shells that the university had purchased. Later that year Florida Tech fielded its first varsity eight crew team under the direction of Robert Dunlop. In 1969, Dunlop, who served as director of Florida Tech’s Marine Facilities, recruited a young Jacksonville college graduate and Melbourne native named Bill Jurgens to serve as the crew team’s coach. In the early 1970s, the Couch House was renamed Roberts Hall Annex in recognition of Fred Roberts’ contributions to the university and his leadership in winning the City of Melbourne’s approval of the construction of a seven-story dormitory on Country Club Road (Roberts Hall).

A Haunting Epoch comes to an End

Roberts Hall Annex was decommissioned as a dormitory in 1997. The official explanation was that NCAA rules prohibited dormitories which exclusively housed athletes. Bill Jurgens, who spent a year living in the Couch House, has no recollection of the “woman in black.” He heard no voices or clunking objects in the night. “I was working ninety hours a week,” Jurgens said with a laugh, “teaching school and up every morning at 5:30 am to coach the crew team. I was so tired that no ghost could wake me up!” It has been at least twenty-one years since anyone has reported a spectral sighting. Maybe the “woman in black” has moved on. Maybe not. If you should be taking a stroll along the boardwalk at the Melbourne Yacht Basin on a dark night, cast a glance in the direction of Roberts Hall Annex. Maybe you will see a bit of “High Tech with a Ghostly Touch.” Trick or Treat?

*Both students requested that their real names not be disclosed.

Note:  This installment of the Secret History was drawn from conversations with Weona Cleveland and her article “Students Live with ‘woman in black’” published in the Melbourne Times on July 18, 1984, 1B. My thanks to Bill Jurgens providing details on the history of Florida Tech’s crew team.