It’s always fun to enjoy being at a conference, but most of the time you don’t think about what it’s like behind the scenes until it’s a little too late.

I am so proud of the work that was accomplished by Florida Tech’s Residence Life. I really couldn’t have imagined being in the position I am in when I joined the Reslife team. My first year as a resident assistant, I heard about this conference called FRAS, the Florida Resident Assistant Seminar. It was basically explained as a regular conference with presentations, but with the benefit of high energy, philanthropy and creativity that happens when Resident Assistants from across the state are put together in one building. At first, I didn’t understand. I thought it was just like an academic conference with a lot of cheering. I was wrong. 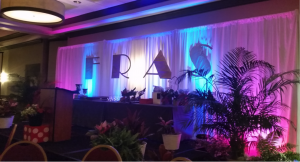 The next two years I attended the conference as a student. The prep work for this conference was overwhelming. Each school gets a theme, like a music genre or a movie. The members of each staff, who are selected to attend the conference, are given characters. Each team creates various crafts and videos based on the selected theme. Then, all of the schools come together and compete to see who has the best cheers, videos, crafts, and even presentations.

After two years of attending the conference, it was announced that Florida Tech would be hosting FRAS 2016 in January, and the theme would be board games. I was impressed. As a small school, it was a feat just to send ten or so RAs to FRAs each year and bring home some sort of award, especially with large public schools in attendance. Hosting a conference would be another challenge altogether, especially with a staff of about 60 people.

Planning began immediately. It was decided that each campus housing area would focus on one section of the conference. Being the Resident Director for the Residential Quad, my staff and I were tasked with planning the presentation portion of the conference. Right away we started with choosing the presentation categories and finding creative ways to link them to the board game theme. We especially decided to add a growing focus of our university: Sustainability.

As a staff, we received 110 presentation proposals. We divided those proposals up based on their categories and had the difficult task of choosing the 40 presentations that would actually appear at the conference. One of our biggest goals when choosing these presentations was to choose the highest quality proposals while still representing all of the schools that applied to present.

After we narrowed down which presentations we would have at the conference, we had to find rooms for all of those presentations. Each presentation was set up in Crawford, and some of the presenters really surprised us. Instead of the boring old presentations that you might expect at an academic conference, the Resident Assistants brought their “A” game. Schools from across Florida came together with videos, dances, activities, plants, food and the general excitement that makes this conference so great.

Watching Resident Assistants from across Florida come together to learn and to share the activities going on at different universities was incredibly rewarding. Everyone was so high spirited, and getting to see how each university differed really made the conference an exciting one. I hope everyone who attended FRAS will be able to bring a new idea back to their university and share a little bit about what they learned while they were at Florida Tech.