Known by some as the Sorceress of Speed, Elaine Larsen can successfully maneuver a 5,000-horsepower, jet engine-powered dragster. She’s traveled at speeds approaching 300 miles per hour in a mere five seconds. And she’s won back to back International Hot Rod Association World Championships.

Her motto is “live fast and play hard.”

She is bold and brave. She’s even the inspiration for a new comic book called Blaze.

Her life has been exciting, dangerous, and everything in between. So when senior communication students learned they needed to film a documentary for their senior design project – they knew who their subject had to be. 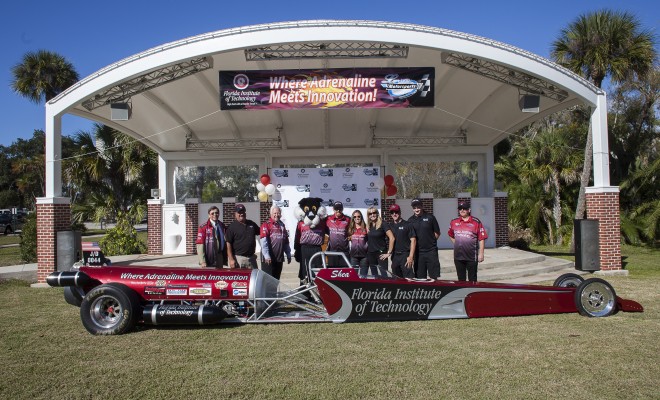 Why Elaine Larsen, of course

Assistant Professor of Communication for Florida Tech’s School of Arts and Communication, Ted Petersen led the project – but remained largely hands-off the creative process, allowing his students to choose and plan the film’s trajectory.

“The hardest part of this project was the beginning and the end,” Gangloff said. “At the beginning, once we knew Elaine Larsen’s story, we had to decide on an angle to take. Her story was simply so chock full of exciting parts that it was almost impossible to narrow it down to a manageable story that we were all passionate about.”

Gangloff’s role was to manage the ‘big picture.’

“From concept to final product, it was my job to create and maintain the integrity of a seamless, engaging story,” Gangloff said. “In the process, I did have to wear many hats.”

But still, the question of how to focus on one story when there were so many interesting angles.

It was not until a few students in the group traveled to Gainesville to spend two days side by side with the Larsen team during a race that they realized what the real story was.

“Elaine is one of the founders and the flashy bang of Larsen Motorsports – but it was the team behind the scenes that made the machine tick,” Gangloff said. “We decided the story of Elaine Larsen is really about the team she has raised up around herself.”

Riley Geeskie was one of the students who traveled to Gainesville. His role was to collect research and to serve as the film’s narrator.

“I traveled to Gainesville for Gatornationals to film the Larsen Crew at the pits and at the races with three other students,” Geeskie said. “We were so grateful for the Larsen team for allowing us to film them as they set up and even helped us get close to the track to get great shots.”

In May, more than 100 people attended the premiere of the documentary – Fired Up: Grit Grind and Jet Fuel, including Elaine Larsen.

“I think the documentary turned out even better than I could have hoped for,” Larsen said. “The students took the time in pre-interviews to fully understand the dynamics of Larsen Motorsports before they even started. Then they asked the important questions. This was amazing.  They didn’t want to take the easy way; they wanted to get a different message across.”

She admits that seeing the Larsen Motorsports story on the big screen was extremely touching for her.

“The biggest surprise was how emotional I got while watching the documentary. I was so proud to see how far out company has come through all types of adversity,” Larsen said.   “From other racers trying to pull my license, to my husband talking about what if feels like watching me go down the track.  I was so impressed.”