About 230,000 miles away, the Apollo 8 crew was completing the first manned orbit of the moon. Astronaut William Anders was photographing the dark side of the moon when he caught sight of the Earth rising. In that moment, Anders snapped what is arguably the defining photograph of the 20th century.

“Earthrise,” as the image became known, would become a U.S. postage stamp, the cover of the Whole Earth Catalogue and the backdrop for newsman Walter Cronkite’s “CBS Evening News.”

The morning after the photo was taken, Apollo 8 mission commander Frank Borman ordered James Lovell to fire the spacecraft’s engines and begin the journey home.

“Please be informed,” Borman remarked whimsically in his confirmation of the successful ignition, “there is a Santa Claus.”

The Origins of Earth Day

The genesis of the Earth Day idea came from a confluence of issues, ranging from air pollution to overpopulation.

In September 1969, Gaylord Nelson, a Democratic senator from Wisconsin, issued a call for “a national teach-in on the environment.” Nelson, who was known in Wisconsin as “the Conservation Governor,” was elected to the Senate in 1962. Seven years later, on a trip to California to study the effects of the Santa Barbara oil spill, Nelson had an epiphany and issued his call for environmental action.

On April 22, 1970, 20 million Americans—10% of the nation’s population—took to the streets as part of a grassroots effort to effect positive change.

Early in 1970, a cadre of Florida Tech students formed the Florida Institute of Technology Ecology Action Council (FITEAC). The FITEAC was the brainchild of Tom Foss and Larry Wilson, oceanography students, and Dave Hughes, a student in the university’s Hydrospace Technical Institute. David Woodbridge, then director of Florida Tech’s Center for Pollution Research, and James Lasater, a Florida Tech oceanography professor at the time, served as the FITEAC’s faculty advisors. On April 9, 1970, Foss issued a call for campuswide support of the Earth Day initiative.

“As FIT students, and future scientists, we should be vitally interested in the state of the environment. … Rallies are being planned nationwide, on college campuses and in cities. FIT will not be left out,” Foss wrote in The Crimson. “A group of students have banded together to promote an ecology teach-in on the FIT campus, with the endorsement of the administration. A rally is planned, and teachers are being asked to devote their classes to discussion of the pollution control.”

“We are going to have an intellectual rap-session,” Hughes added, in the parlance of the 1970s.

Throughout the day April 22, professors devoted class time to exploring environmental topics, and the “rap-in” began at 3 p.m. with 450 students gathering in Gleason Performing Arts Center. The high point of the two-hour session came when Foss, Miller and Hughes announced the winners of the dubious Florida Tech Polluter of the Year Award.

In the run-up to Earth Day, the FITEAC asked students to identify Brevard County’s worst polluters. With tongue-in-cheek solemnity, Hughes announced that at the “teach-in,” Florida Power and Light (FPL) would receive “a five-gallon can of swamp water” for its contributions in making Brevard County a worse place.

Second-place honors, in the form of a bent beer can, went to the Melbourne sewage treatment plant. The 450 students who took part in the poll and “teach-in” gave a special citation to Florida Tech’s cafeteria and food services for their persistent injury to students’ gastrointestinal environments.

At the last minute, Foss and Hughes scuttled the vaunted Florida Tech Polluter of the Year Awards.

“We didn’t really want to offend the companies,” an embarrassed Foss explained. “It was a token thing to make people aware of pollution.” Perhaps more important, Foss said, they were told that the awards also opened them up to libel lawsuits.

Eight days after the first Earth Day, President Richard Nixon announced that he had issued an order authorizing U.S. troops’ entry into Cambodia. Nixon’s action sparked a wave of protests against the widening of war in Vietnam.

Three members of the National Security Council resigned in protest. Four days later, members of the Ohio National Guard fired on unarmed student demonstrators at Kent State University.  Four students were killed, and nine were wounded. Protests followed at more than 400 American colleges and universities, 200 of which would close.

The spring of 1970 was a turning point in American history. The war in Vietnam would end five years later in the fall of Saigon. The Yom Kippur Arab-Israeli War in 1973 would lead to an oil embargo that transformed American life. In 1974, the Watergate break-in and cover-up would lead to Richard Nixon’s resignation. The Iran hostage crisis, Soviet invasion of Afghanistan, hyperinflation and nuclear incident at Three Mile Island would follow. The world was becoming an increasingly dangerous place.

But, all was not lost. In the tumult and social unrest of the ’60s and ’70s, Earth Day advocates sought to make a difference, and they made progress.

“It was a gamble,” Nelson recalled, looking back on that April day, “but it worked.”

The world has changed much in the past 50 years. In 2020, the COVID-19 pandemic has made us all aware that we are members of a single species living on a small planet.

Years ago, the late Nobel laureate Peter Medawar defined a virus “as a piece of bad news wrapped in protein.”

There is certainly ample evidence of just how bad the news can be. At the same time, students and professors at universities around the world are working to find ways to combat the virus.

One month after the first Earth Day, Foss published a retrospective editorial in The Crimson. He wrote:

“A group of 30 devoted people together, with the Administration’s knowledge and aid, the April 22 Earth Day program.  Yet this program as successful as it was, was not yet a total Success. Attendance at the rally in Gleason only 450 people. Although this was by far the best participation in any activity on this campus, it was still not good enough.”

Fifty years ago, Foss and his ecology action comrades gave expression to our university’s core value:

“Just because no one ever listens to your problems. Don’t give up. Hit again, from a different angle,” he wrote in The Crimson.

“Just because no one ever listens to your problems. Don’t give up. Hit again, from a different angle.”

The challenges we face are formidable. We remain inhabitants on that tiny bit of blue set against the darkness of space in the iconic “Earthrise” photograph.

If nothing else, the COVID-19 outbreak has brought home the message that we are all in this together. Foss’ message is as relevant today as it was 50 years ago: Remain resolute, don’t give up and strive to make a difference.

Florida Tech students, faculty and staff are striving to make each day an Earth Day.

Ten years ago, the university launched its sustainability studies bachelor’s degree program. By May 2017, more than 100 students had completed majors and minors in sustainability. Campus organizations, such as the Squamish team, the Student Organization for Sustainability Action, the Ethos Community Garden Club, the Residence Life Sustainability Committee, Alpha Phi Omega and the newly formed Keuper Palm Botanical Society, are working to improve the environment both on and off campus.

Since 2013, the administration has committed the university to designing buildings that meet Leadership in Energy and Design (LEED) standards.

“You’re either part of the solution or you’re part of the problem,” Eldridge Cleaver, a political activist and early leader of the Black Panther Party, said in his book Soul on Ice in 1968, weeks before the Apollo 8 mission.

Cleaver’s words still ring true. This day, and every day, each of us has a chance to make the world a better place.

Want to learn more about the history of Earth Day? Sit in on Professor Gordon Patterson’s virtual Earth Day lecture for his course, HUM 2332 American History: Reconstruction to the Present. 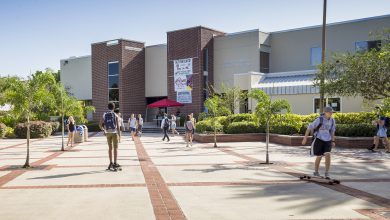 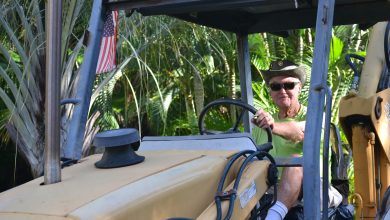