Among the first places new Florida Tech students visit for orientation and the last place they see before the commencement procession to the Clemente Center, Gleason Performing Arts Center has spent its nearly 52 years as an unobtrusive but essential facet of campus life.

When it officially opened Oct. 14, 1967, Gleason was described in publicity materials as “one of the finest and most fully equipped private auditoriums in Brevard County.” Yet over the years, that distinction dimmed.

But dim no more is our beloved theater, now ablaze with light following a summerlong project that replaced the 1960s-era lighting system from lobby to stage with cutting-edge LED lights.

With 129 new fixtures, the enhanced production capabilities and operational cost savings are a technological triumph.

The new lighting system is expected to cut the center’s electrical use in half while positioning it among the area’s most versatile venues and offering unique student experiences. From contributing to the development of the computer network infrastructure that links all the LEDs to digitally choreographing custom light displays to performing within a state-of-the-art stage environment, Florida Tech students get a front-row seat to stagecraft.

This story was featured in the winter 2020 edition of Florida Tech Magazine. Read the full issue here. 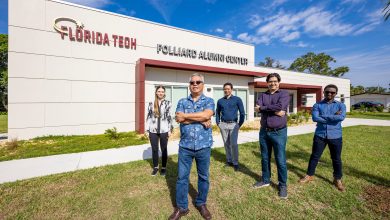 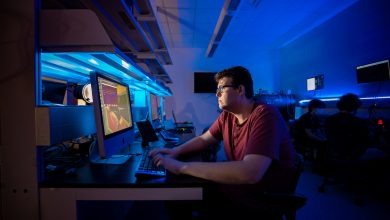