As a computer science major, it is important for me to stay current on what operating systems are gaining popularity and traction. A couple years ago, Microsoft unveiled Windows 7. The two main functions of this operating system were to erase the memory of the horrid Windows Vista, and replace the good (but old) Windows XP. A couple months before the launch of Windows 7, Apple revealed an updated version of Mac OS X called Snow Leopard. 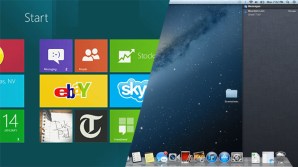 Three years later, history is to repeat itself. Apple has been busy competing with the Google Android operating system with the iPhone. Microsoft has also come out with a Windows phone. It is safe to say that this summer; the battle is back on with Apple releasing the new OS X Mountain Lion and Microsoft releasing their new Windows 8. I believe it is no coincidence that Apple decided to announce the release of their new operating system just after Microsoft announced theirs.

Right now, we can only see the developers preview and I can only imagine what the final version of these two operating systems will look like. Although Windows has been dominating the market as the traditional operating system, Apple’s iPad and iPhone has threatened to replace the PC as the primary choice of one’s everyday computing activities. Windows 8 tablets will face a large number of competitors, including the iPad and a large variety of devices running Google Android.

Windows redesigned their operating system to follow closely with their Windows phone. I think they designed it to look and feel more how touch screen computers do. Apple’s Mountain Lion similarly takes big developments from mobile operating systems that first appeared on the iOS. These include iCloud, which syncs user data (including mail, calendars, contacts and documents) between devices, and a new messaging feature that allows Mac users to send unlimited messages to iOS devices through the internet.

I have used both Windows and Mac products. In my experience I feel that Mac is a lot better. The system rarely crashes, compared to Vista and 7. Are you a Mac person or a Windows person? If you are a computer science major, do you prefer working with one operating system over the other and why?