By Audrey Gangloff, for The Communicator

Breathtaking. It’s hard to put that feeling into words, that moment of rapture.

Your heart does a little flutter, your jaw may drop, or maybe, a small smile of wonderment hits your lips.

You forget to breathe, just for that moment.

Ask any student in the School of Arts and Communication (SAC) Study Abroad Netherlands 2016 program how their summer was, and they will remember that feeling. Their eyes will prob­ably light up as they search for a way to explain the experience. 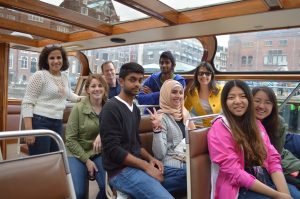 Ask them what their favorite part was, and they will likely shake their head and helplessly tell you that it was all simply amazing.

This year’s study abroad program took nine students on a priceless trip of a lifetime in June.

They were communication and business students, engineers and scientists. The eclectic group that started off as strangers found themselves quickly bonded together by the magic of wanderlust.

The first leg of the journey started not in an airport, but in the classroom.

The students spent three weeks taking one or both of the courses offered in conjunction with the pro­gram. The driving pace of learning a semester of knowledge in three weeks is intense.

One common goal inspired the group to push through the daily four-hour classes. They knew that once they were done, it was travel time.

They were told to pack for all weather. In the Netherlands, said professor Judith Strother, Ph.D., it may be cold and rainy one day and breezy and sunny the next.

With suitcases full of options, they set out on the first leg of the adventure.

The program had a unique opportunity this year to do a three-day layover in Iceland before hitting the mainland. Svafa Gronfeldt, a 1995 communication graduate, donated several scholarships for some of the travellers and wanted to welcome the group to her home country.

One of the program’s scheduled corporate visits was at Ossur, a prosthetics company headquartered in Reykjavik. That visit was one of the few required curriculum activities during the two-week jaunt.

The chance to experience 24 hours of daylight in Iceland, even for just three days, was one of the highlights of the trip.

Shrivana Jamunar, a business student from Trinidad, saw snow for the first time on a high Icelandic mountaintop.

“It was like jumping into a snow cone,” she said in her musical, smiling accent. “It was so much fun!”

That same day, the group had their hair misted by the spray from the biggest waterfall in Europe and walked through a geyser field, driving around huge lakes and through vibrant green pastures.

The strangeness of it all was the first true bonding experience for the group outside the classroom.

The last night in Iceland was the first time they saw any kind of color in the sky. It was midnight, but the sky was faintly painted in the pastels of dawn.

This pit stop was so chock full of new experiences that several members of the group said their favorite memory was in this rocky land.

Chemical engineering student Sulaiman Alkalbani said swimming in the Blue Lagoon with his travel mates and everyone painting their faces with natural silica masks is the one thing he is sure to remember for the rest of his life.

Two more hours east on a plane, two trains and a midnight bus ride brought the students to Eindhoven, their home base in the Netherlands.

The study abroad program is affiliated with Eindhoven University of Technology.

Students visited the university and met some interesting figures from the Brainport community, a region in the Netherlands akin to Silicon Valley.

The rest of the trip was truly a whirlwind.

The opulence of Antwerp’s long and rich history was apparent in every city square and twisting alleyway.

Strother’s expertise shined in her choice of hotel location. There are astounding cathedrals littered all over northern Europe, but the one standing outside the front doors of the Hotel O Kathedral was one of the most awe-inspiring.

On Sunday morning, communication student Jennifer Wayne woke up early with some travel mates to attend mass there.

“One of my favorite memories was walking through Antwerp Kathedral with Dr. Strother and seeing the architecture, hearing about how significant this place was for her and being able to share my love of art history with some­one,” said Wayne. “Someone who’d be fine to sit there and talk with me while I exude all my enthusiasm about it.”

A day trip to Bruges, Belgium was a medieval wonder for much of the group. The town is one of the best preserved medieval cities in Europe, mostly untouched by modern influences.