Accounts by Henry Peebles, Director of Environmental and Regulatory Compliance

Murphy’s Law (or at least a corollary): “Given all the possible outcomes, all of them will occur eventually – after the worst ones possible happen first.” 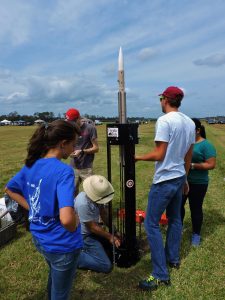 The objective of the competition was to build and launch a hybrid powered rocket. There were two categories of competition to choose from. The first category consisted of launching a hybrid rocket to the maximum altitude. The second category challenged the teams to fly their rocket closest to 2,000 feet in altitude.

Florida Tech sent Teams Max and Precision. Team Max’s focus was figuring how fast they could build, if could do it at the last minute and if they need the directions to build the rocket. Team Precision foundation was based on careful, meticulous, measured planning.

The teams were comprised of freshman and sophomore aerospace engineer majors. A total of 19 students competed. 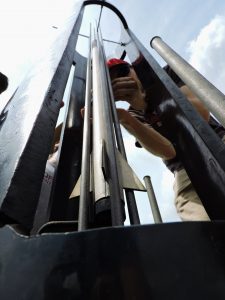 Henry Peebles, Director of Environmental and Regulatory Compliance, attended the competition with the teams. This is his story of the day:

Team Precision was up first. The Range Safety Officer announced the range and sky clear. The tanking of the oxidizer began and the seconds ticked by. All looked good as the countdown started. 3…2…1… Flames erupted and, WOOSH, the rocket leapt skyward, almost out of sight. We could see through the binoculars the parachute deploy right on schedule. We recovered the rocket. 2,399 feet above ground level. The computer simulation was for 2,049. Something was amiss, but the students would find it.

Team Max was up next. Once again, the RSO announced the range and sky clear. A Star Trek moment occurred when the rocket vanished from the pad. Where did it go, we asked as we scanned the sky. We couldn’t see it through the binoculars.

“I GOT IT,” came a loud student voice, followed by another and another, but I still couldn’t find it.

About half a mile away to the west, the rocket was falling ballistically, rapidly approaching the maximum speed of cardboard and plywood. 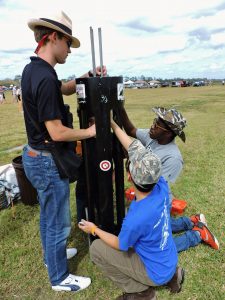 Was it over the tree line? We started to panic when, BOOM, a miracle occurred. The recovery streamer deployed at few hundred feet off the ground. A post-hole was avoided and the rocket hit the ground hard. We thought the rocket had escaped damage. Unfortunately, the internal battery was destroyed on impact. The new battery and the electronics disgorged their data. (3,700 ft. agl).

The old adage goes, “Better to be lucky than good.”

This error saved their flight. If they had followed the directions, their recovery system would have carried the rocket a mile or more into the woods. The “need for speed” and luck had prevailed. 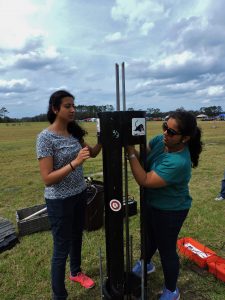 Team Precision was up again and their target was 2,000 ft. Computers and calculators carefully evaluated the first flight. They evaluated the wind speed and direction. Changes were made to the flight vehicle. Their care, precision and meticulous rocket science was about to result in the perfect precision rocket flight.

The RSO announced the range and sky clear. The tanking of the oxidizer begins, the seconds tick by and I announced, “Venting…”

A week earlier, Team Precision had carefully constructed two hybrid motors for flight day. This was done under the watchful eye of their leader, Larissa Balestrero. There were no mistakes. Well, almost none. At the time, no one noticed that it took just a little too much force to close up the oxidizer tank of engine two. A critical silicone O-Ring had caught on a sharp snap ring groove in the tank wall. It ripped. It was already inside, so no one could see the tear. 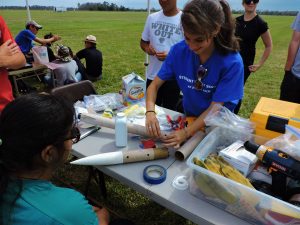 Wait, I thought to myself. Through the binoculars I saw venting higher up the rocket where there should have been no venting. Oxidizer was escaping through the recovery bay. I thought, we have to stop the count. But, as I was observing and thinking, the count continued.

The rocket again leapt off the pad, and then at 211 ft., the rocket came apart. The parachute was out and motor was firing at full force. The rocket jumped and danced across the sky. While 2,000 ft. was out of our grasp, style points and applause exploded from all the spectators.

The team results were based on points for the launch of the rockets, notebooks, team built rockets and motors, and deducted for status reports.

Team Max and Precision placed second in their respective categories.