Dr. John Lavelle is an Associate Professor of English in the School of Arts and Communication. He’s also a creative writer and the advisor for Kaleidoscope, Florida Tech’s Art and Literary Magazine.

John: When someone asks me this question, I’m always reminded of the movie Smart People.  The character played by Dennis Quad is asked what his book is about by the character played by Sarah Jessica Parker.  He then spends the next two hours explaining it to her, so I’m always wary when answering that question, attempting to interpret it in the context it was asked.  The short story I’m working on now is about a man who wakes up in the middle of the night and is convinced he’s died.  Everything that happens to him afterwards is interpreted as some kind of punishment no matter good or bad.

Inspiration is sometimes serendipitous; something someone says, a person I meet or a situation gets my imagination going.  Then I play with the idea.  Sometimes they work and sometimes they don’t.  If they don’t I put them away until I’m inspired again.  However, other times, as in the novel Oreads, forthcoming January 29, 2016, I had a story I believed needed to be written down.  I saw a culture vanishing with the incursion of modernity and postmodernity into the hills and mountains of Appalachia.  Although historians can chronicle facts and artifacts, writers are the ones to chronicle the ideologies that create the facts and artifacts in a way that is more humanistic.  This was what was being lost, a type of view of reality, a type of people.  I set out to capture this way of life that was all but gone by the late seventies. 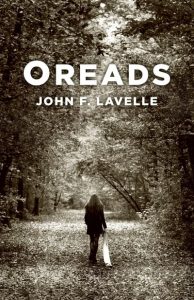 2.What conclusions or assumptions (right or wrong) might someone make if they looked at the books on your bookshelf/desk/backpack right now? Tell us about some particularly interesting selections and any books you’d recommend to others.

John: I guess it depends on which bookshelf.  I look pretty academic for the most part with much of my collection focused on the working class, power, poverty, or Appalachia.  However,  I’m not an Appalachian writer nor a working-class writer.  There is also a large section on writing, both academic and creative along with a fairly large collection of novels, short stories, and poetry, comparatively.  Yes, like most Humanities professors, I have a lot of books.

I’m usually recommending the book I’m reading at the time.  The one now is The Flamethrowers by Rachel Kushner.  Some people might find this book a little slow but I’m a literary fiction fan, so well-wrought sentences that evoke images in new ways excite me more than does plot.  She can put together some great ones.

3. What or who inspires you when you are feeling creative?  Your response doesn’t necessarily have to be about writing. It could be about anything you do to express yourself creatively and the inspiration that fuels that creativity.

John: As I said, it depends.  However, it never ends up being one single thing that motivates me to write or inspires me once I’m writing.  In my novel Oreads, I was also inspired by the traditional music of Appalachia inspired by Scott/Irish folk music and how it seemed to hold so much importance in the lives of the people.  I saw the traditional music as a source of metanarratives counter to that of sanctioned religious beliefs or state ideological apparatus.  Religion, a major metanarrative, was starting to lose it hegemonic position within the lives of these people.  At the same time the centralizing education systems were starting to take its place as a major state ideological apparatus.  However, during the 1960s, when the story takes place, the counterculture movement, which has always existed, was making itself know through the use of mass media especially through its traditional outlet, music.  I also wanted to explore the influence of music, especially pop music, to say rock and roll and Country Western, as the replacement for the traditional Appalachian folk music as a carrier of alternative metanarratives.

While working through this idea, I decided to structure the book as a type of folk ballad itself with each chapter constructed as a verse.  It tells a story of several young women struggling to redefine themselves when the beliefs they’d been given no longer seem to hold true.  Thus each chapter starts by setting place and time and situation and then a little piece of the story.