Fred Ham, Florida Institute of Technology dean of the College of Engineering, vice president for research and Harris Professor of Electrical Engineering, was recently promoted to Fellow status by SPIE, an international society for optics and photonics. The organization was established in 1955 to advance light-based technologies. Ham, who was acknowledged for his outstanding achievements in bio-optic sensor systems, was recognized at the SPIE Defense, Security and Sensing Conference in Orlando, Fla., in April.

A Fellow is considered by the society as someone who has made significant scientific and technical contributions in optics, photonics and imaging. Candidates who are considered for a promotion to Fellow status must be nominated. A committee then evaluates their performance in technical accomplishment and their service to the general optical community and SPIE. Since its founding, 900 SPIE members have become Fellows with 67 added this year.

Ham is a Fellow of IEEE, a member of Eta Kappa Nu, Tau Beta Pi, Phi Kappa Phi and Sigma Xi. He is also a senior member of the International Neural Network Society, a past president of the society, and currently serves on the society’s Board of Governors. Ham has published more than 100 technical articles, holds three patents, and authored the textbook, Principles of Neurocomputing for Science and Engineering, published by McGraw-Hill Higher Education.

Before joining Florida Tech in 1988, Ham was a staff engineer at Harris Corp. working in digital communications and control system design for large space structures. Prior to Harris, Ham was a geophysicist with Shell Oil Co., processing marine seismic data.

CUTLINE: Fred Ham, at left, with 4-Star Gen. James Cartwright, the distinguished speaker at the SPIE Awards Banquet.
Cartwright is the eighth vice chairman of the Joint Chiefs of Staff. 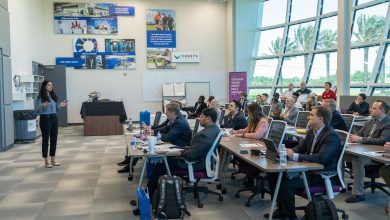