MELBOURNE, FLA.—At Florida Institute of Technology’s recent Honors Convocation, Andrew Hernandez earned the 2013 Donald R. Mason Award. It is presented annually to the outstanding senior in the Department of Chemical Engineering. Hernandez, the first Phillip W. Farmer Scholar, holds a 3.80 GPA and graduated May 4. He is a 2009 graduate of Jesuit High School in Tampa, Fla.

In addition to his many pre-college honors and accomplishments, Hernandez’s academic excellence at Florida Tech earned him the Pi Kappa Alpha New Member Academic Award, the Florida Tech Distinguished Student Scholar Award, and Outstanding Junior and Senior Awards. He also maintained membership in the Phi Eta Sigma National Honor Society and was named to the Dean’s List every semester at Florida Tech.

His extracurricular activities include working with the Florida Tech Office of Development raising money for student scholarships; serving on the Florida Tech Quality of Life Committee for the President’s Office; serving as a student justice on the university disciplinary committee representing the Student Government Association, and earlier as a senator, academic committee head, and Student Activities funding committee member of the Student Government. He has also been public relations and campus involvement chairman of the Pi Kappa Alpha Fraternity, Zeta Sigma Chapter; a Greek Life task force member; Fall Orientation Panther Prep leader; and an Independent Colleges and Universities of Florida (ICUF) Presidential Fellow. In the latter position, he represented Florida Tech to Florida’s legislative bodies, meeting with State senators and House representatives.

In athletics, Hernandez was a member of the Florida Tech Ultimate Frisbee Club, playing competitively against other universities, and was named a Greek Week champion, playing for the Pi Kappa Alpha Fraternity. In recognition of his dedication to serving his university and students, he was awarded the President’s Gold Volunteer Service Award, and last year was nominated by the university for the internationally renowned Rhodes Scholarship.

He also earned valuable research experience working for nearly two years as a research assistant to Dr. Shaohua Xu in the Department of Biological Sciences. The ongoing project aims to improve the understanding of and move closer to a cure for Alzheimer’s disease.

“Biomedical education and research are interests I have wanted to follow. I wanted other students to have an opportunity I did not have available to me, so I lobbied the university administration in the creation of the new Biomedical Engineering Program, to benefit future generations of Florida Tech students,” said Hernandez.

Last summer, he won first place in a Student Research Program and Competition, sponsored by the National Science Foundation at the University of South Florida. His award for research involved the design, modification and physical testing of an implantable biogenerator, addressing the need for a method to produce electrical energy within the human body to passively support internal implants.

“He accomplished all this while also working hard in his courses and maintaining one of the highest GPAs in our senior class,” said Manolis Tomadakis, head of the chemical engineering department.

Hernandez will spend the summer in an internship at Mainstream Engineering Corp. in Rockledge. This fall, he will continue in the chemical engineering program for his master’s degree, as a Fast Track student.

The Farmer Scholar program, which funded Hernandez, provides a full four-year Florida Tech scholarship annually to a Florida resident and high school graduate. Included in the scholarship are all tuition and university fees, a room in Harris Village’s Farmer Hall and the regular university meal plan. 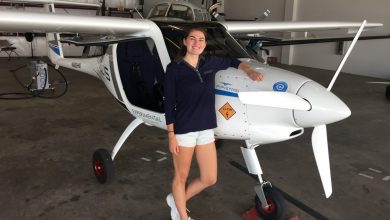