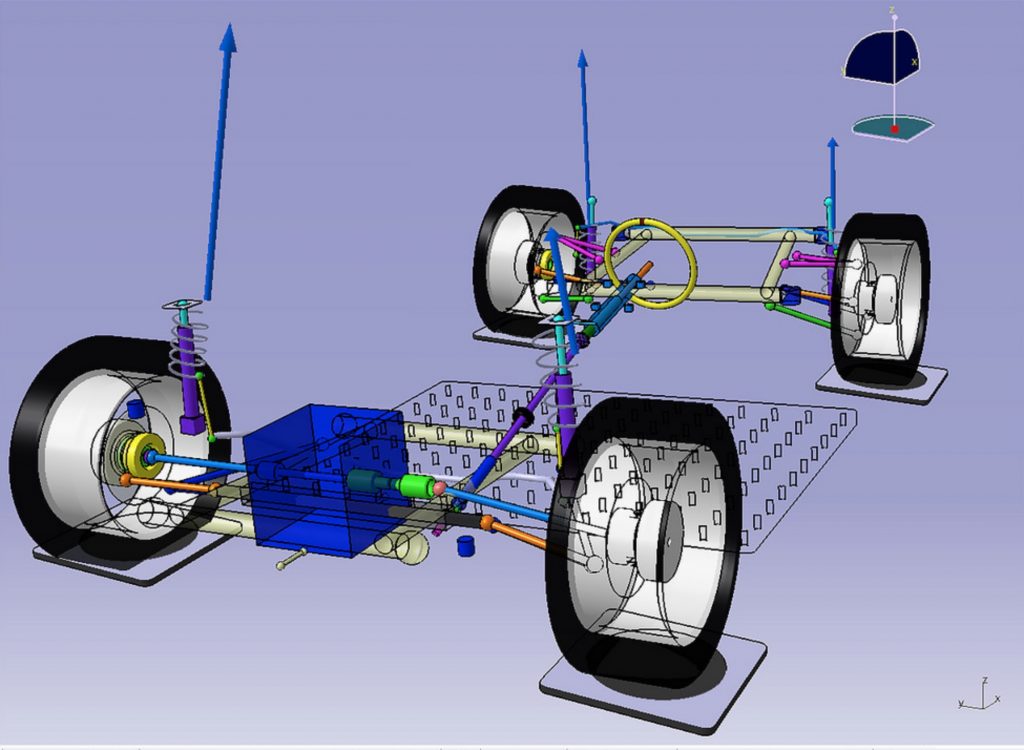 In 1913, Henry Ford revolutionized manufacturing with a rope.

At his automobile factory in Highland Park, Michigan, the visionary businessman threaded a rope through a vehicle chassis. That allowed the unit to be pulled down the line, where groups of workers performed their tasks as it got to their area.

The time to assemble a vehicle went from 12 hours to 90 minutes.

As the 20th century progressed, there were other technological advances in manufacturing. Electronics and software became a part of the process, with computer-aided design taking design work into the cyber world.

What was envisioned on the monitor was then built and tested in the real world – in a wind tunnel, a temperature chamber.

Computers and programming became more powerful, however, and they began being used to test the functionality of the product as well as help design it. Advanced programs allowed virtual prototypes to be stressed, weighted, heated and otherwise tested as if they existed. Costly physical prototypes were no longer needed.

We are in the early stages of another leap forward in manufacturing. Often referred to as Industry 4.0, this revolution takes Ford’s improvements from the factory floor to the mother boards and circuitry of computers, and alters the role factory workers play.

“In the past, we’ve built a factory and tried to figure out how to make the manufacturing process work,” Grieves continued. “Now, we can put the product into simulation, see it moving down the line, take measurements and learn from what doesn’t work.”

Though in large part virtual, this product lifecycle management (PLM) process has – and will have – real-world impacts.

Grieves, who spent decades in the computing and manufacturing industries and remains a consultant, offered an example: At one point there were 14 welding robots in use at one of the legacy automakers. By using modeling and simulation, it was determined that the same work could be done by just four robots.

“We found that fewer robots could work efficiently together,” he said.

The subsidiary of of Siemens AG, a global powerhouse focusing on the areas of electrification, automation and digitalization, in October provided Florida Tech with an in-kind software grant valued at $246 million that will enable the university to offer students powerful, hands-on learning experiences to better equip them for future STEM careers in Industry 4.0.

The grant is centered on Siemens’ industry-leading Product Lifecycle Management software, which is used by more than 150,000 companies around the world in the aerospace, automotive, medical device, machinery, shipbuilding and high-tech electronics sectors.

The software will allow for the creation of virtual factories, a critical step forward in both advanced manufacturing itself and preparing the workforce to succeed in that evolving industry.”

“Software is at the core of an ongoing digital transformation that is changing the way our customers approach the manufacturing process, from design to production into service,” Tony Hemmelgarn, president and CEO of Siemens PLM Software, told the university. “Through our partnership with Florida Tech, we are helping empower the next generation of digital talent with access to valuable hands-on training with both software and hardware tools. This real-world, project-based learning will offer students the STEM skills they need to succeed in the digital future.”

Put into use at CAMID and Florida Tech’s renowned College of Engineering, the Siemens products will create what Grieves called “a powerful ecosystem” where industry, software solution providers and students create knowledge and push advanced manufacturing forward.

If the Siemens software grant is the fuel for powering into, and helping to shape, the future of manufacturing, CAMID is most certainly the engine.

Based in a building in Palm Bay, Florida, once home to the semiconductor manufacturer Intersil, the 100,000-square-foot center will offer the latest digital modeling, simulation and visualization technologies as well as computer-driven manufacturing equipment. Students and companies will undertake product research, supply chain and workforce training.

“We are creating a product research, design, engineering and manufacturing collaborative environment for students and companies with advanced, digital-driven capabilities,” Grieves said.

CAMID is funded in part by a $1.4 million grant from the U.S. Economic Development Administration and a $300,000 grant from the City of Palm Bay, which will help with the launch of one of the center’s first tenants, the Virtual Integrated Technologies Application Lab. And earlier in 2017, the center was awarded $1.5 million dollars in infrastructure funding through a Department of Education appropriation in the State of Florida.

CAMID is undergoing physical improvements and upgrades even as tenants such as Larsen Motorsports utilize other space in the facility.

“We are excited about CAMID because of how it will foster innovation of all sorts,” Grieves said. “Through world-class research we will seek to improve the advanced manufacturing landscape. Working with major corporations, equipment providers and others, we will seek ways to more effectively design, secure, test and manufacture globally competitive products.

“We are, in fact and in theory, building a better future.”