Dana Hustedt, director of esports, has been named Florida Tech’s Most Valuable Panther for November.

“Dana Hustedt came on board with Florida Tech in 2021 as the director of a fledgling esports program and has turned it into a first class arena offering competitive and club gaming programs. As the first woman in the country in the role of esports director, Dana represents a major step forward for women and inclusivity.

Not only is she an exceptional director, but she also actively seeks opportunities for collaboration with the community and other departments on campus. Due to Dana’s efforts there is now a strong working relationship between the esports program and the School of Behavior Analysis. Through this relationship, behavior analysis undergraduate and graduate students are allowed the opportunity to help the esports coaches implement the science of behavior for improved performance of the teams and players.

Dana is dedicated to making esports a professional space that promotes personal development, inclusivity and excellence from its athletes. She supports play-as-self-care and games as a connecting force. When she found friction between players, she immediately gave feedback and resources to them and arranged a free workshop series open to all students to help teach them skills in these areas.

Outrageously productive in her outreach, Dana represents Florida Tech in global conferences and events. For these reasons Dana is our Most Valuable Panther.” 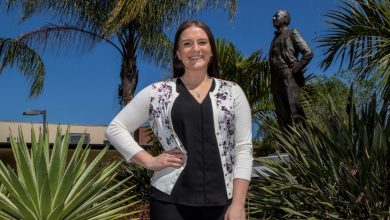