The Florida Tech chapter of the Phi Kappa Phi was recently recognized with one of the honor society’s highest honors, the Circle of Excellence Gold Award.

The Circle of Excellence Chapter Awards program recognizes chapters for work in promoting excellence on the local campus and engaging the community of scholars each year. The awards utilize data submitted by the chapter to the national office regarding yearly activities and initiation efforts.

Founded in 1897 at the University of Maine and headquartered in Baton Rouge, La., Phi Kappa Phi is the nation’s oldest and most selective all-discipline honor society. The Society has chapters on more than 325 college and university campuses in the United States, its territories and the Philippines, and since its founding, more than 1.5 million members have been initiated. The mission of the Society is “to recognize and promote academic excellence in all fields of higher education and to engage the community of scholars in service to others.” 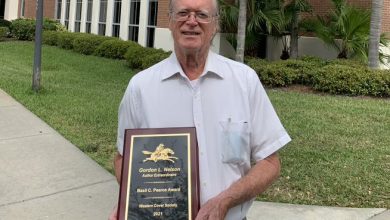