Research led by Richard Aronson into the effects of rising sea temperatures on invasive crabs in Antarctica was cited in the National Academies’ 2022 report, “Antarctic Science: Why U.S. Leadership and Investments Matter.”

The 50-page report describes the Antarctic environment and its ecosystem as “tenacious, yet fragile,” and in the preface notes that “humanity’s relationship with Antarctica is also tenacious yet fragile.”

It continues, “This tenacious, fragile continent inspires awe and demands respect. It also needs our protection….As is evident from the wide range of scientific activities, Antarctica both holds immense value for advancing human knowledge and faces immense threats from human influences on the environment, the impacts of which have global consequences.”

On pages 14 and 15, those threats are shown thanks to the work of Aronson, professor and head of ocean engineering and marine sciences, and others. A picture of a king crab, with a mention of “Florida Institute of Technology,” is featured on page 14. Those are the critters that Aronson and his colleagues studied to show how ocean warming is allowing them to move into new areas.

On the next page, the report again refers to this research: “Of the western coast of the Antarctic Peninsula, for example, studies suggest that warming waters could allow king crab populations to move from the deep sea to the relatively shallow continental shelf, where they could become high-level predators and disrupt the ecosystem.”

The report concludes with a look forward.

“A continued commitment to science, cooperation, and a shared vision for the future are required to build on this rich history of discovery and answer crucial questions in the decades ahead.” 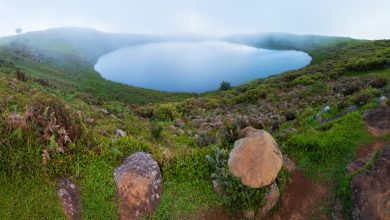