One of our biological oceanography undergrads is the ever-lovely Hannah. Hannah looked at populations of minute organisms living in the sediments (infauna) throughout the Indian River Lagoon. She analyzed the type of soil and biodiversity present at each of her sites, hoping to highlight differences in infauna biodiversity living in different types of soil.

“This is important,” she says, “because these small organisms are the base of the food chain for many commercially important organisms in the IRL, such as the blue crab and bottom-feeding fish such as the red drum.” After she graduates, Hannah plans to return to Florida Tech for her master’s in biological oceanography, studying biofilms. I asked Hannah some questions about her field projects experience.

What was your favorite part of field projects?

I liked that we got to work on several different projects throughout the summer instead of just our main project. So, I got to learn some meteorology stuff, even though I’m an oceanographer.

What did you learn from field projects?

I’ve heard a lot of complaints that muck smells like sulfur or rotting waste, yet you spent some serious time digging through it, looking for microscopic organisms. Can you describe what went through your mind when having to spend hours face-to-face with this stuff?

I really, honestly thought, “wow … my hands smell awful,” when I spent about two hours filtering the muck. I had to wash my hands probably five times and I ended up giving up trying to count my samples that day because I couldn’t get away from the smell left on my hands! 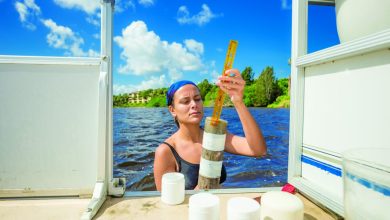