Frogs are in trouble. Their population is declining at a rapid pace. Nearly 200 species have disappeared since 1980, an extreme abnormality as the norm is typically a rate of only one species every 250 years. But a new app called WhatFrog, created by Florida Tech researchers, could play a large part in saving them.

Make no mistake, frogs are no weaklings, they have been around for about 250 million years, surviving ice ages, asteroids, and outlasting many other species including dinosaurs.
In order to stop the decline, scientists must study the anuran (frog and toad) population, however standard methods to secure this data such as sensors that would detect frogs, or employing highly trained researchers to conduct surveys are cost prohibitive, and teaching volunteers to recognize frog calls on their own has proven time-consuming and met with variable success.

That’s where the WhatFrog app comes in. It’s able to identify anuran calls by utilizing voice recognition – technology that would typically cost $1,000.

And what does the app cost?

But why are frogs so important you ask?

The skin secretions of frogs have significant potential to improve human health through their use as pharmaceuticals.

Approximately 10-percent of Nobel Prizes in Physiology and Medicine have resulted from investigations using frogs. When a frog species disappears, so does any promise it holds for improving human health. An example of this can be found in the Northern Gastric Brooding Frog from Queensland, Australia. They held great promise as a cure for peptic ulcers, which affect 25 million people in the United States alone. Unfortunately, they vanished within a few years of being discovered by scientists.

People with severed limbs, spinal cord injuries and other traumatic wounds may someday be able to regrow lost nerves and tissue due to studies being conducted now in which scientists were able to regenerate severed tadpole tails.

And let’s not forget that frogs eat those pesky mosquitoes; and serve as food for other species. 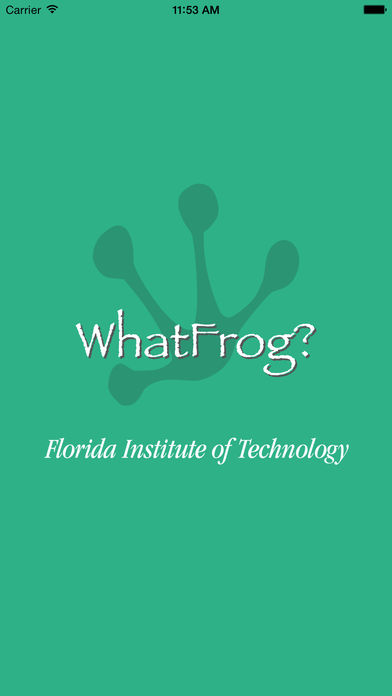 The project is led by Mark Bush, Florida Tech professor of biological science. Eraldo Ribeiro and Ronaldo Menezes, both associate professors of computer science at Florida Tech, helped develop the application and students were involved in beta testing and in recording frog calls for a sound library.

When, Florida Tech professor of biological science, Mark Bush first flew into Melbourne for a job interview he was astonished at the number of lakes and wetlands he could see from the plane’s window.

“As a bio-geographer and conservation biologist I immediately started to wonder about how much connectivity there was in this landscape,” Bush said. “Would the frogs and toads of one pond be different from those of another or was this just a big melting pot of amphibians?”

His first research students at Florida Tech worked on wetland conservation questions and one of those projects was on frogs. Around that same time, Bush received his first research grant to pursue his main area of interest, the paleoecology (ecological history of climate change and human activity) in South America. Frogs and Florida wetland research was largely forgotten as he busied himself with work in Amazonia the Andes and the Galapagos.

But as evidence of global climate change mounted, and as the local discussion over the value of small wetlands became more intense, he decided that a return to the frog survey data of 20 years ago might be in order.

“The way we had surveyed frogs in the 1990s was to stand beside a pond about an hour after sunset and listen for five minutes. We documented all the frogs that we heard in that time,” Bush said. “This technique was the standard method of conducting surveys for frogs and toads. Of course, those surveys would be influenced by the skill of the listener at hearing and identifying the calls. Surely, I thought, in the age of phones and apps there must be an app for that. But there wasn’t.”

Citizen Science initiatives were in place to document frog calls up and down the country. These volunteers provided essential data that, when viewed as a whole, told the story of how frogs and toads were responding to multiple pressures from urbanization to pollution and climate change.

“An app that used the latest techniques in voice recognition could help to standardize the quality of those efforts,” Bush said.

Currently the app contains enough recordings to identify about 40 of the commonest frogs and toads in the USA. They hope to expand this number, improve accuracy and enable some game-like features within the app.

“We hope that teachers, students, and naturalists will find the app useful, entertaining and educational,” Bush said. “The average age of citizen scientists is 55, perhaps by introducing an app like this that connects to social media we can attract a different, younger, cohort of enthusiasts inspired to protect our wildlife.”

For more information about WhatFrog and to download the app, visit here.